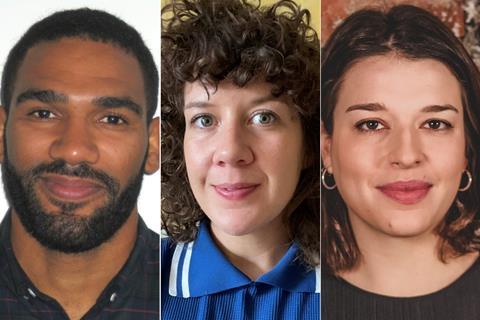 The UK’s Film4 has made four appointments to its creative team following the departure of senior commissioning executive Lauren Dark last week.

David Kimbangi has been promoted to senior commissioning executive, filling the role vacated by Dark; while Amy O’Hara and Alice Whittemore join the organisation from BFI Network, both as development and production executives.

Mélys Codo is promoted from development coordinator to development editor; while Ben Coren’s role as head of development is expanding to include feature documentaries.

Kimbangi joined Film4 as development and production executive in 2018, and has worked across films including Last Night In Soho, Rocks and Boxing Day, as well as Foresight, an upcoming collection of short films exploring alternative visions of the future for Black and brown people in the UK.

He will commission and oversee production on new projects, as well as co-managing the development team alongside senior commissioning executive Julia Oh and Coren. Kimbangi will report to creative director Ollie Madden.

O’Hara previously worked at Film4 from 2013 to 2016, as assistant to deputy director, the late Sue Bruce-Smith. She rejoins having worked at STX, and most recently as a talent executive on BFI Network’s Film Hub North development body. She will continue to be based in the north of England, working between there and Film4’s London office.

Whittemore also joins from BFI Network where she was talent executive for Short Circuit, the emerging talent hub co-funded with Screen Scotland. She has previously worked as BFI Network Wales manager at Film Cymru Wales, and in the talent development and production team at Film London. She is relocating to London in her new Film4 role.

O’Hara and Whittemore replace Kimbangi and Celine Coulson, who recently departed Film4 for UK production firm Duck Soup. Working alongside development and production executive Max Park, both will scout new writing and filmmaking talent as well as contributing editorially to their projects.

As development editor, Codo will be assigned to Film4-backed projects, reporting to Coren.