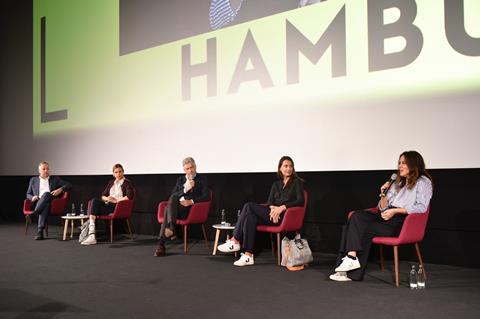 Leading German producers Janine Jackowski of Komplizen Film and Katharina Hiersemenzel, the senior vice president of public policy of Constantin Film, challenged Wolf Osthaus, Netflix director of public policy for Germany, Austria, and Switzerland, of a perceived imbalance between the streaming services and independent producers at an industry panel at Filmfest Hamburg.

The producers said the signing of the production service agreement meant that the copyright and any revenues for a project stayed in the hands of the streamer, and the production company’s function amounted to little more than serving as an “extended workbench”.

“Two legal worlds are colliding with one another: one of the total buyout and one of the European copyright system,” Jackowski said, pointing out German producers had successfuly fought to have rights revert to them on commissioned productions made on behalf of the local broadcasters.

Osthaus said there was no hard and fast rules on how the streaming service works with producers and that they were “basically ready and open” for every kind of cooperation. “It depends on when you come to us: we have shown that we are willing to commit very early on and then also be involved in financing the development as part of a total package,” he said.

“And other things come to us in a developed state, in finished scripts or maybe have finished production and where we then just license them. It’s different from project to project.”

On the issue of sharing rights on a production, Osthaus suggested that agreeing to such a model “depends strongly on the partner and on the respective situation the partner is in and what possibilities they have for exploitation [of the rights]. We are totally open with every partner we work with to see what is the best way, and if we end up paying less and the partner in return gets a few rights, well that’s really great.”

Osthaus also revealed that, while its production output in Germany was “marginal” compared to that of the traditional broadcasting corporations, Netflix had nevertheless seen the number of originals produced in Germany increase from seven last year to 20 so far in 2020.

The panel was moderated by media lawyer Harro von Have  and also included screenwriter Ipek Zübert. All the speakers were physically in Hamburg.

Recent Netflix originals made in Germany have included Maria Schrader’s Emmy-winning series Unorthodox, inspired by Deborah Feldman’s eponymous bestseller and produced by Airlift and Real Film; the six-part historical drama Barbaren, produced by the German arm of France’s Gaumont empire which airs from 23 October; the science thriller Biohackers, produced by Claussen+Putz Filmproduktion and now planning production on its second season; and the streaming service’s first German documentary series, the four-part true crime series A Perfect Crime, which was produced by Gebrüder Beetz Filmproduktion and launched on the Netflix platform to over 190 countries on 25 September.

The beginning of this year saw Filmförderung Hamburg Schleswig-Holstein’s CEO Helge Albers able to convince the City of Hamburg to committ to an additional €2m dedicated to high-end series coming to shoot in the region.