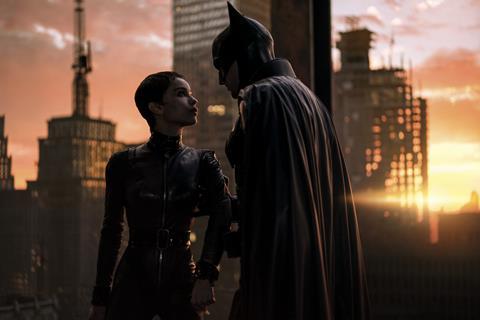 MARCH 21 UPDATE: Warner Bros’ The Batman experienced tolerable erosion in its third weekend of play, declining approximately 45% in North America and 46% in international holdover markets. However, a fresh opening in China, grossing a confirmed $11.7m, helped pump up the international numbers. In China, Imax accounted for $2m or 16% of takings.

Playing on 18,600 screens in China, The Batman achieved the biggest opening weekend of a US title in 2022 – although competition for that particular honour is pretty thin. Warner Bros reports that approximately 43% of cinemas are currently closed in China due to a new wave of Covid.

At the same stage of release in like-for-like markets, The Batman is tracking 35% ahead of The Dark Knightand 9% ahead of Justice League. The latter title grossed $658m worldwide in 2017, and The Batman is already 91% of the way to matching that total.

The Bad Guys, which features a quintet of animal criminals attempting to reform, took a confirmed $8.4m from 25 territories, led by Spain with $1.8m (ahead of Encanto to deliver the biggest animated opening of the pandemic era, and nabbing the box office top spot from The Batman). Second best is Mexico, with $1.4m, opening in second place behind The Batman. Germany delivered $1m and Brazil $600,000 – likewise landing in second place behind The Batman in both markets. The next key territories to open are Italy and Australia on March 31 and UK/Ireland on April 1. France follows on April 6.

The story of bank robbers who hijack an ambulance after a heist goes awry and must then help a paramedic get an injured cop to safety opened in Saudi Arabia, the top market from the initial wave, on $965,000 followed by Mexico on $745,000.

The film has yet to open in most key territories and faces its real commercial test this week when it arrives in France and Italy on Wednesday (March 23), Brazil and Germany on Thursday (March 24) and UK/Ireland and Japan on Friday (March 25).

The arrival in North America of Japanese anime Jujutsu Kaisen 0 saw the film land in second place at the domestic box office with an estimated $17.7m for distributor Crunchyroll. The film is based on the Gege Akutami manga series, and directed by Park Sunghoo, who also helmed the 2020 anime TV series Jujutsu Kaisen.

Jujutsu Kaisen 0 has grossed $108.4m in Japan since release last Christmas, and also $3.7m in South Korea. The film landed in UK/Ireland last Wednesday via Sony, delivering an estimated five-day $1.1m. The global total including North America is now $144.7m.

The film follows Yuta Okkotsu, a nervous high school student who enrols at the mysterious Tokyo Jujutsu high school under the guidance of Satoru Gojo after being haunted by the curse of his childhood friend. The manga was serialised in Shueisha’s weekly Shonen Jump and has sold over 60 million copies in Japan.

Like The Batman, Sony’s Uncharted received a boost from its arrival in China – and grossed $10.4m there after seven days of play. That helped swell the international weekend tally to an estimated $19.0m.

Totals for the PlayStation videogame spinoff are now $125.9m in North America and $211.4m in international markets, combining for $337.3m worldwide.