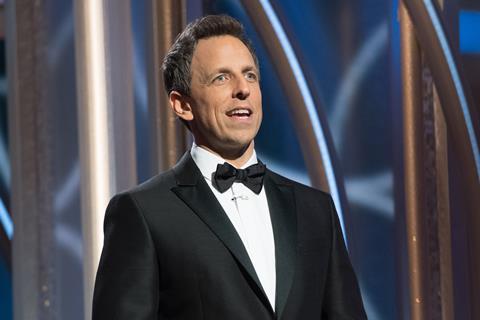 He added: “For the male nominees in the room tonight, this is the first time in three months it won’t be terrifying to hear your name read out loud. “Did you hear about Willem Dafoe?” “Oh, God, no!” “He was nominated.” “Don’t do that! Don’t do that.”

Some of his other targets included:

“Harvey Weinstein isn’t here tonight. Because, well, I’ve heard rumors that he’s crazy and difficult to work with. But don’t worry, he’ll be back in 20 years when he becomes the first person ever booed during the ‘In Memoriam.’”

“They tried to get a woman to host this show, they really did. They said, “Hey, how would you like to come and be judged by some of the most powerful people in Hollywood?” And women were like, “Hmm, well, where is it?” And they said, “It’s at a hotel,” and long story short, I’m your host tonight.”

”Give it up for the Hollywood Foreign Press. A string of three words that could not have been better designed to infuriate our president. ‘Hollywood foreign press.’ The only name that could make him angrier would be the Hillary Mexico Salad Association.”

“I was happy to hear they’re going to do another season of House of Cards. Is Christopher Plummer available for that, too? I hope he can do a Southern accent, ’cause Kevin Spacey sure couldn’t. Oh, is that too mean? To Kevin Spacey?”

“The Shape of Water received the most nominations of any film this year. Just an incredibly beautiful film, but I have to admit, when I first heard about a film where a naïve young woman falls in love with a disgusting sea monster, I thought, “Oh man, not another Woody Allen movie.” Like “Manhattan” in water.