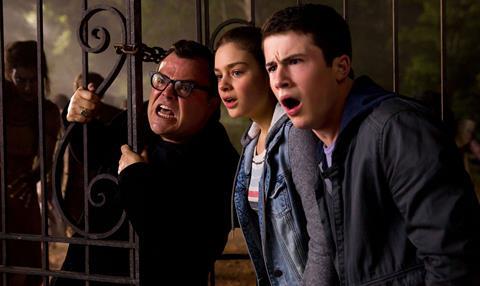 Goosebumps ended The Revenant’s reign as the UK’s number one with a promising debut ahead of the school half term.

Jack Black’s previous collaboration with director Rob Letterman, Gulliver’s Travels, is ahead of Goosebumps with an opening Fri-Sun tally of $3.4m (£2.33m) when stripping out its extensive previews.

Gulliver’s Travels went on to take $22m (£15.23m) at the UK box office and with the upcoming school holiday, Goosebumps will hope to be able to challenge that tally if it can hold off the family competition.

It may not be an official chart topper, but Dad’s Army did lead the charge over Fri-Sun at the UK box office.

Universal’s big screen outing for the beloved sitcom posted a $3m (£2.07m) debut from its 585 sites, marking a $5,128 (£3,535) site average. It’s a solid start but a true measure of its success will be if it connects with the midweek older audience.

Comparisons are tricky given the age of the original sitcom. Most recent big screen comedy adaptations are from newer shows. For example, Dad’s Army came in far behind Mrs. Brown’s Boys D’Movie’s $6.2m (£4.3m) UK bow from 522 sites, but that would have attracted a younger audience.

The ‘grey pound’ contenders are probably a better indicator and the most successful one, The Best Exotic Marigold Hotel, posted a debut a little higher than Dad’s Army at $3.2m (£2.22m) from 504 sites.

Lionsgate’s comedy seems to be thriving despite the critical mauling and is now up to $5.3m (£3.66m). If it can continue the solid hold this coming weekend, Dirty Grandpa will look to challenge the $8.9m (£6.2m) result of director Dan Mazer’s debut I Give It A Year.

eOne’s awards contender is up to a ten-day tally of $3.8m (£2.64m) and will hope to continue its solid first mid-week performance, which saw it come second most days behind The Revenant but bank more than $1m (£700,000).

Ahead of its release this Friday [Feb 12], Zoolander 2 banked $967,000 (£667,000) from previews on Saturday and Sunday. It is already on the cusp of overtaking the overall debut of its predecessor.

With the arrival of the likes of Zoolander 2 and Deadpool, it’ll likely suffer this coming weekend.

Room has crossed the £3m mark at the UK box office in its fourth weekend.

StudioCanal’s A Bigger Splash, Icon’s Oddball And The Penguins and Universal’s Jem And The Holograms all receive wide releases.

eOne’s The Green Inferno, Picturehouse Entertainment’s Meru and Warner Bros’ The Iron Giant: Signature Edition are among the films receiving a limited release.