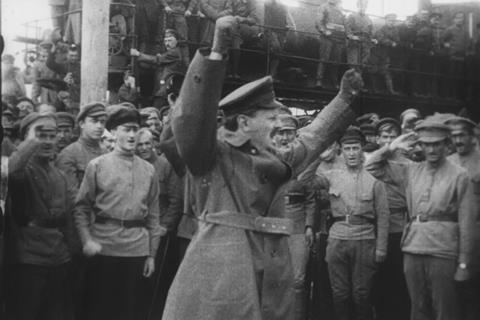 ‘The History Of The Civil War’

International Documentary Film Festival Amsterdam (IDFA) has announced its Luminous and Frontlight titles, as well as the world premiere of the newly-restored The History Of The Civil War, a little known film from legendary Soviet-era director Dziga Vertov.

It will mark the first time the film has been seen since Vertov, best known for The Man With The Movie Camera, made it in 1921. The film covers key events in the Russian civil war and features many leading historical figures, among them Leon Trotsky.

Film historian Nikolai Izvolov used historical records to reconstruct the original silent film from archive material and commissioned a new soundtrack, will be present for the premiere. This will be held on November 20 in the Tuschinski Theatre in central Amsterdam with the score performed by the Anvil Orchestra.

IDFA is taking place as a physical event in the Netherlands from November 17-28.

Several familiar names feature in IDFA’s Frontlight section which has 19 films of which 12 are world premieres. Among the selection is When We Were Them, a new documentary which Oscar-winning Bosnian director Danis Tanovic has co-directed with Damir Šagolj that looks at the inhumane treatment of refugees in Bosnia.

Meanwhile, Oeke Hoogendijk, director of The New Rijksmuseum and My Rembrandt, is back with The Treasures Of The Crimea which explores what happened when a leading Amsterdam museum staged an exhibition of artworks from the region whilst the area was annexed by Russia. Suddenly, the museum found itself drawn into a complicated and explosive geo-political battle about where the art belonged.

From the UK, Maia Kenworthy and Elena Sánchez Bellot’s Rebellion tells the story of climate lawyer Farhana Yamin and her campaigning work with Extinction Rebellion. It is produced by Kat Mansoor at Halcyon Pictures and executive produced by Kevin Macdonald, Lisa Marie Russo and Sandra Whipham.

Another familiar figure from Dutch documentary in the line-up is Petr Lom, whose Letter To San Zaw Htway tells the story of artist and political activist San Zaw Htway, who suffered at the hands of the military in Myanmar and died in 2017. He is now regarded as an inspirational figure by other artists and activists in the aftermath of the 2021 coup in the country.

IDFA’s Luminous section will this year have 21 titles, all of them premieres.

Meanwhile, from the Netherlands, Maasja Ooms will be presenting Jason, the third in her trilogy about the problems facing the Dutch youth welfare system.

The final competition titles and opening film will be announced on Monday, November 1, during the IDFA 2021 press conference.