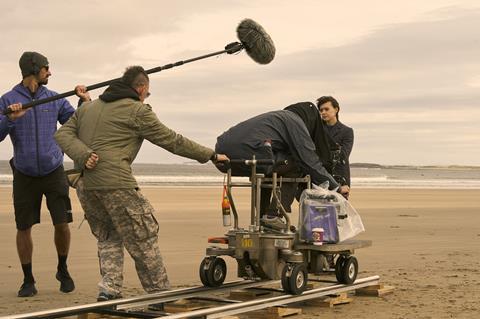 On set of ‘Normal People’ in Ireland.

As the US struggles with the challenge of restarting production with the number of Covid-19 cases on the rise, several European location hubs are reporting an uptick in interest from footloose film and high-end TV projects.

“We have had a significant number of new enquiries in the past month from a wide range of international territories including North America,” said Steven Davenport, inward production manager at development agency Screen Ireland.

Ireland officially reopened to film and TV production on June 29.

“There was a high level of production activity in Ireland when the pandemic hit and we are confident that projects which were in production at that stage, will return to Ireland in the coming months,” Davenport continued. ”Our competitive 32% tax incentive, along with a 5% regional uplift for filming in regional areas, is available and being processed as usual.”

Screen Ireland did not confirm which works are underway or scheduled to shoot.

However, it is understood returning projects will include US Apple TV+ sci-fi series Foundation, based on Isaac Asimov’s book and starring Jared Harris and Lee Pace. The series had begun filming at Troy Studios in Limerick at the start of the year, and was the largest single production ever to film on location in Ireland.

Damon was already in Ireland in advance of production and stayed in the South Dublin suburb of Dalkey during the first two months of lockdown.

Nathalie Biancheri’s independent feature Wolf starring George MacKay and Lily-Rose Depp is also expected to return; it was due to begin production in April for Bankside Films.

It is not yet plain sailing: international visitors to Ireland, including from the US, must fill in a Covid-19 Passenger Locator Form and restrict their movements for 14 days after arrival.

Over the Irish Sea in the UK, the focus is on restarting productions that were underway or about to shoot prior to lockdown. Universal’s Jurassic World: Dominion at Pinewood Studios and the second series of Urban Myth Films’ War Of The Worlds 2  are just two of the shoots that have been able to either restart or start anew.

“A billion pounds-worth of production mothballed in the UK in March – that was filling most of the studios,” said Adrian Wootton, chief executive of the British FIlm Comission and Film London, said of the UK production sector when it was forced to halt all activity due to lockdown. “What we’ve been focused on is getting the bottle stopper pulled out with the guidance, to try and get stuff started again. I certainly haven’t been contacted by film or television productions saying ‘we can’t shoot here so can we come to you?’.”

Wootton confirmed major UK studios, including Pinewood, Elstree, Shepperton, and Leavesden, have all reopened their doors. “It’s very positive that people are going back to work,” he said. “I’m very confident over the course of the next few months, as we roll through July and August, the majority of that billion pounds-worth of production that had been mothballed will go back up.”

Quarantine requirements in each UK nation have been relaxed to allow in select international film and high-end television stars, directors and producers of UK-qualifying productions if they are deemed essential. Those individuals are allowed to work in controlled “bubbled” environments behind closed doors. Productions need to follow government Covid guidance and put in place stringent protocols to ensure that they have a minimal impact on public health.

In recent days the UK government has raised the possibility of mandatory face coverings in crowded spaces. Wootton says the health and safety production guidelines will adapt to whatever measures come in.

”The guidelines are a living, breathing document,” he said. “We’ll keep on updating and amending it, both by changes that are required by government, but also if there are best practices that emerge - if people on set find more effective ways to do things.”

This process has already started, he said, with productions reporting the need to build in rest periods for crews who are tiring due to being in full PPE. “They have to make amendments to the amount of time they shoot and the amount of rest periods, and the additional costs that are inevitably caused by extending the production process.”

However, the ongoing difficulty of securing insurance has restricted the number of independent, non-studio productions that have actually been able to get going.

Eastern Europe back in production

Meanwhile, local production across Eastern Europe and the Baltics has resumed and most countries in the region are preparing to welcome back US projects.  EU rules state US citizens are only allowed to enter the country under special circumstances but exemptions can be secured.

In the Czech Republic, international productions that were forced to interrupt their shoots have been allowed to return to the country from mid-May. These include Amazon series Carnival Row and Wheel Of Time; Marvel Studios’ The Falcon And The Winter Soldier; and Netflix film 473 Transatlantic. However filming has yet to resume on these titles.

In Romania, local outfits such as Castel Film and Alien Films Entertainment are preparing to begin production on US projects from next month, on which details are being kept under wraps.

While local and international productions were given the greenlight to resume in Estonia from June 1, there are no US productions scheduled to shoot in the territory at this time, according to the Estonian Film Institute. Christopher Nolan shot scenes for Warner Bros. Tenet in capital Tallinn last summer.

Hungary, however, is preparing to host a series of major projects following an easing of lockdown restrictions and building on record-breaking production spend in the country last year ($565.6m). After restarting local shoots in mid-June, Netflix series Terra Vision begins filming in July while additional shooting on Legendary’s Dune, directed by Denis Villeneuve, is scheduled for August. Further upcoming projects include Amazon’s The Banker’s Wife, Sony’s The Nightingale and Showtime’s live-action Halo, based on the hit video game.