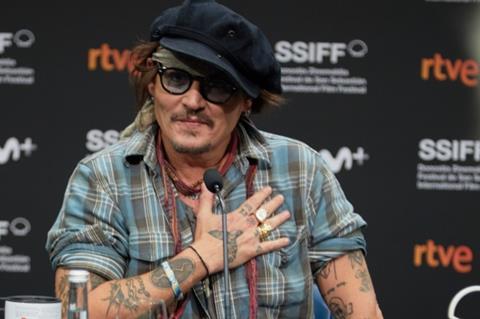 The recording was of a statement Heard made outside the High Court in London in July 2020 during a libel case brought by Depp against UK newspaper The Sun, in which the court found the tabloid’s claims that Depp was a “wife-beater” to be “substantially true”.

“It has been incredibly painful to relive the break-up of my relationship, to have my motives, my truth questioned and the most traumatic and intimate details of my life with Johnny shared in court and broadcast to the entire world,” said the recording.

In spite of the interruption the conference continued, although it was not without incident. The session moderator blocked a question from Spain’s Association of Female Filmmakers asking how he felt about their objection to the honour and did not allow any further mention of the subject, although Depp did address cancel culture.

“It’s a very complex situation, this cancel culture, or this instant rush to judgement based on essentially what amounts to polluted air,” said the actor, who was due to collect the Donastia Award later on Wednesday evening and was also honoured recently at Karlovy Vary.

“It’s got so far out of hand that I can assure you no-one is safe, not one of you, so long as someone is willing to say one thing. It takes one sentence, then there’s no more ground. The carpet has been pulled. It’s not just me it’s happened to; it’s happened to a lot of people – women, men, children have suffered from various types of unpleasantries that sadly at a certain point they begin to think it’s normal, it’s them. It’s not.

“I believe that no-one is safe. If you are armed with the truth, that’s all you need. It doesn’t matter if a judgement per se has taken some artistic licence. When there’s an injustice, whether it’s you or someone you love or someone you believe in, stand up. Don’t sit down. They need you.”

“Hollywood is not what it was”

Depp was also critical of Hollywood’s current output. “At this moment, after being in the racket for 30-plus years now and experiencing various things, learning the game of Hollywood just so you don’t have to play it, Hollywood is certainly not what it was. The grudge matches, the pandemonium and chaos of cinematic release to streaming – it is a case of, ‘No matter what, I’m going to get mine.’ That’s where these people are coming from. They realise they are just as disposable as I am – some more.

“How much more of a formula do we need from studios? How much more do we need to condescend? I’ve said this for a long time – Hollywood has grotesquely underestimated the audience.”

He was also sceptical of the future of cinemas in the wake of the pandemic: “It put people in their houses with their families for long periods of time with a television and they could watch virtually any movie they wanted. The majority of the world went, ‘You know, this ain’t bad. We can sit and watch this thing at home. We can cook some popcorn’, as opposed to the idea of a guy who makes $700 a week and wants to take his wife and kids out to dinner and a movie on the weekend, which is a $200 deal. I think the Hollywood movie machine has a few design flaws they are just realising. I’m glad I saw it coming, personally.”