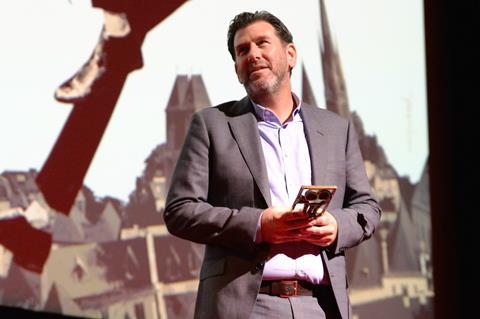 The box-office hit, starring Joaquin Phoenix and directed by Todd Phillips, also won the audience award at the festival, which returned to Torun, Poland.

The Silver Frog went to cinematographer César Charlone for his work on Fernando Meirelles’ The Two Popes, while Vladimír Smutný won the Bronze Frog for Vaclav Marhoul’s The Painted Bird.

The 27th edition of the festival recorded more than 4,500 attendees, 750 of those cinematographers from 75 countries, and screened 188 films.

The closing ceremony proved a star-driven event, with prizes handed out to Quentin Tarantino, Edward Norton and Richard Gere.

Tarantino received the director-cinematographer duo award alongside Robert Richardson, his director of photography on five films, including Once Upon a Time in Hollywood.

Tarantino compared their relationship to a marriage and recalled how he wanted to order monogrammed towels when they first started working together on Kill Bill: Vol 1, before attributing his visual sophistication to Richardson.

Norton was honoured with the Krzysztof Kieslowski award for his writing, directing and acting work, including his most recent directorial effort, Motherless Brooklyn, which screened in competition.

Gere received the festival’s special award for an actor and presented the lifetime achievement award to John Bailey. The former AMPAS president was DoP on Gere movies including Ordinary People and American Gigolo. In an emotional speech, Bailey cited the inspiration of his wife, editor Carol Littleton (E.T., The Big Chill).

Other awards saw the documentary feature prize handed to Luke Lorentzen’s Midnight Family, which tells the story of a Mexican family who run a private ambulance. The feature previously won the Grand Jury Prize at Sheffield Doc/Fest.

However, festival attendees expressed frustration from the lack of female representation in the main competition, where none of the 13 films featured either female cinematographers or directors.

Camerimage returned to Torun, where the cinematography festival was first launched 27 years ago, and is set to oversee the building of a new cultural institution  in the next six years.