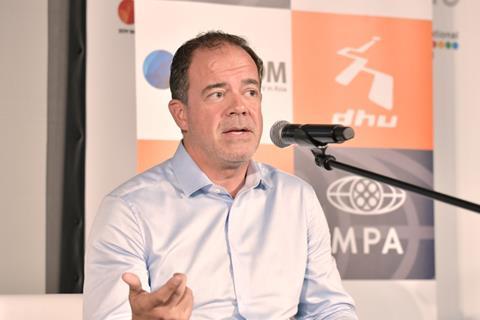 US producer Jon Kuyper outlined the differences between producing $100m studio movies and an $8m straight-to-DVD project at the MPA-DHU workshop (Oct 22) at TIFFCOM.

He also touched on producing Ridley Scott’s upcoming TV series for TNT, Raised By Wolves, and how all the rules change when budgeting and scheduling episodic drama.

Emphasising how important safety should be to a producer, Kuyper described his experiences on Mad Max: Fury Road, which involved a 99-day shoot in the Namibian desert with complicated stunt shots nearly every day.

“It’s all about rehearsal – we had the money and time to rehearse all the stunts to death,” Kuyper said. “Every day we had one unit doing drama and a few stunts, and another doing stunts and a bit of drama. Some of those stunts were being developed ten years before we shot – we had gymnasts with special ability in wirework, and what they call air awareness, and many other specialists and highly-trained people.”

But then Warner Bros also asked him to produce a straight-to-DVD installment in the Scooby-Doo franchise, Scooby-Doo! The Mystery Begins, for just $7.5m. “This is an excellent case study for scaling – the two theatrical Scooby Doo movies each cost a bit more than $90m,” Kuyper said.

“From experience, I knew we could shoot this movie for $4m in Vancouver with rebates, a smaller crew and being efficient with locations. That gives you about 30 days shooting, which is plenty of time to tell your story. However, we also had a digital character, so that left about $3 for Scooby and other effects.”

Kuyper said he worked out they could spend about $8,000 per shot, giving them about 375 VFX shots for the movie, which is not many if your main character is digital. So he went back to the script with the writers and director to figure out how to make that work.

“Scooby was in about one third of the movie, but of course we spread him out across the two hours, and made side stories without him. Fred and Velma would go off and have their own little adventure. It’s all about embracing the appropriate elements of your story.”

On a completely different tack, Kuyper is currently producing his first TV series, Scott’s 10-part Raised By Wolves, about androids raising human children on a mysterious planet. “For the scheduling we had ten hours that we broke up into five blocks,” Kuyper explained. “Ridley Scott directed the first two episodes, the second block was his son Luke Scott – it was almost like doing a feature film every five weeks.

“I would be prepping with the next director while the current director was shooting, which was very different for me as a producer because I’m used to working with one director and being with that director in all phases of production – pre-production and planning; during the shoot, solving problems on set and giving encouragement, and then in early post I usually hand it over. Now I was dealing with one director who was shooting, one prepping and another director giving notes on the script.”

Kuyper got his start in the industry working with indie legend Roger Corman in the early ‘90s. “I only worked for him for eight months and we did 12 features. I was really tired,” Kuyper chuckled, adding that it was also a great way to learn how to be resourceful.

After working for Warner Bros and Lionsgate, he moved into independent producing with Sean Penn’s The Last Face: “Sean Penn is definitely of that school where he plans enough to know exactly what he wants out of the scene, but leaves it loose enough so that on the day you can play with things if someone has a different idea.”

The masterclass was held alongside a feature film pitching contest, with five Japanese projects from up-and-coming filmmakers. The top prize, including a trip to Los Angeles to meet US studio executives and talent agents, went to Satsuki Okawa’s The Murderer Always Sings Lullabies. John Hill’s The River At Night was selected to pitch for funding from the MPA APSA Academy Film Fund during the Asian Pacific Screen Awards in Brisbane next month.