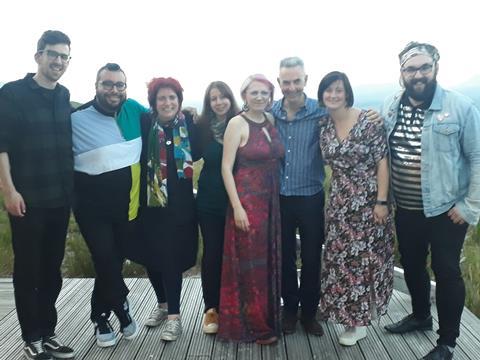 The six participants, selected from more than 100 applicants, were:

The scheme is open to writers, directors and producers who are Scottish residents, working across film or TV in Gaelic or English.

As a production company, Young Films’ credits include Gaelic-language feature Seachd, The Inbetweeners (TV show and film), and Gaelic-language TV drama Bannan (which will start shooting its seventh season on Skye in September).

The sister non-profit Young Films Foundation was set up in late 2017.

The residency consisted of masterclasses, panel discussions, one-to-one mentoring, as well as practical acting, directing and editing workshops as the six participants each shot one scene from their upcoming projects at Skye Space Studio in Sabhal Mòr Ostaig.

At the end of the week, the participants screened their scenes and re-pitched their projects to industry experts.

Young told Screen, “We have massive talent in Scotland and I wanted to find a way to help mentor them. At the end of this week, hearing feedback from the industry here, I know some of these projects are going to be made. The participants seem to feel this week has transformed them and their projects. That feels like a great result and a good step forward for Scotland.”

Participant Omar Raza said he had gained new insight into his TV series pitch Bromance, about a 30-year-old gay Muslim virgin living in Glasgow, after speaking with mentors all week, as well as feeling more confidence as a creator. He said, “It’s amazing being in front of such expert professional eyes, it’s energised me.”