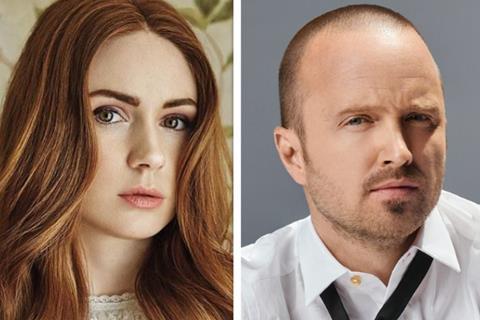 Karen Gillan will star in dual roles opposite Aaron Paul in the satirical sci-fi Dual for writer-director Riley Stearns and XYZ Films.

Stearns wrote the script and will produce alongside XYZ Films. Dual centres on a woman who opts for a cloning procedure to make it easier for her loved ones after she receives a terminal diagnosis.

However when she makes a miraculous recovery, her attempts to have her clone decommissioned fail and lead to a court-mandated duel to the death.

Production is scheduled to start later this summer. XYZ will handle global sales on Dual and jointly represents the US with CAA Media Finance and UTA Independent Film Group.

Gillan is best known for her roles in the Jumanji franchise, as well as Guardians Of The Galaxy series and Avengers: Endgame. She wrote, directed and starred in The Party’s Just Beginning and will next be seen in Gunpowder Milkshake.

Paul can currently be seen in season three of HBO’s Westworld and is best known for his iconic role of Jesse in AMC’s Breaking Bad. Eisenberg’s credits include The Social Network, the Zombieland films, and current release Resistance.

Koale is best known for his role in Hawaii Five-O, while Kelly’s credits include Marriage Story and Spider-Man: Homecoming, and the series Baskets.