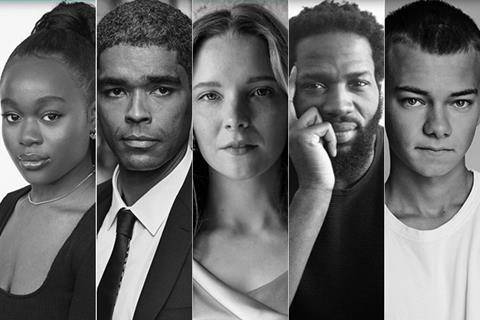 Bafta has announced the five actors in the running for the 2021 Rising Star award:

All five nominees are British, for the first time in the award’s 16-year history. The winner will be announced at the Bafta ceremony on April 11, the format for which has yet to be announced.

The full Bafta nominations will be announced on March 9.

The five actors are nominated in their own right as opposed to for a single role; but must have had a film released in the past year of Bafta eligibility.

Three of the five nominees were previously named Screen Stars of Tomorrow – Clark and Dìrísù in 2016 and Khan in 2020.

Ben-Adir played Malcolm X in Regina King’s historical drama One Night In Miami, having previously appeared in TV series including Peaky Blinders and The OA.

Bakray made her acting debut in teenage drama Rocks, produced by Fable Pictures, playing a girl who must care for her young brother when her mother goes missing. She was nominated for two awards at the recent Bifas – best actress and most promising newcomer.

Having amassed credits including The Falling, Love & Friendship and TV’s His Dark Materials, Clark has received widespread acclaim for her lead role in Rose Glass’ religious horror Saint Maud. She is currently shooting Amazon Studios’ The Lord Of The Rings prequel series in New Zealand.

Dìrísù was nominated for the best actor Bifa for his role as a refugee struggling to adjust to small-town English life in Remi Weekes’ horror His House.

Conrad Khan’s nomination is supported by his breakout role as Tyler in Henry Blake’s County Lines, the story of a 14-year-old boy who is groomed into a criminal network.