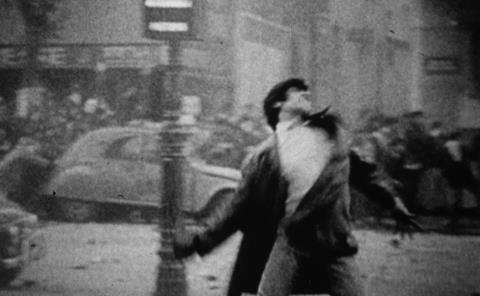 ‘In The Intense Now’

Paris-based Luxbox is relaunching sales on Brazilian filmmaker Joao Moreira Salles’s In The Intense Now (No Intense Agora), exploring the political upheavals that swept the world in the 1960s, a year after it first premiered in Panorama at the Berlinale.

It is an unusual move but the company and the film’s director and producers are convinced the documentary can seal a new wave of deals ahead of the 50th anniversary of the student uprising in France in May 1968 as well as the Prague Spring and Soviet invasion of Czechoslovakia.

“Joao Moreira Salles has made an amazing, poetic documentary which is sure to capture the attention of a worldwide audience in this year marking the 50th anniversary of May ‘68,” said Hédi Zardi, Luxbox co-chief alongside Fiorella Moretti.

Framed as a personal essay, the documentary combines archive newsreel and amateur footage to explore key political upheavals across the world in the 1960s, from the French student protests of 1968 to the beginning of China’s Great Proletarian Cultural Revolution in 1966, which was captured by Salles’ mother.

Videofilmes, the joint production company of Joao Moreira Salles and his brother Walter Salles, have handled the international career of the film until now.

“We feel it remains very relevant for us to join them now to spread the aura of this unique and poetic documentary,” said Zardi.

The documentary is currently showing in cinemas in Brazil, where it has been seen by more than 17,600 spectators since last November, and has just opened at the Film Forum in New York after rave reviews in The New York Times and The New York Review of Books.

Following its Berlinale premiere, it went on to screened in more than 30 film festivals worldwide, winning a slew of awards along the way.

“May ’68 in France can be seen as the template for many contemporary social movements. That might explain why audiences in different parts of the world reacted to the film according to the political context of the place where they were watching,” Salles told Screendaily.

“In the US, people wanted to talk about Occupy Wall Street; in Tel Aviv, about the Arab Spring; in Argentina, about the end of the Kirchner regime; in Brazil, about the street protests of 2013. This tells me that the events shown in the film help people think about their own struggles.

“It gives me great pleasure to know that, because of LuxBox, In The Intense Now will now find new audiences, people with different perspectives and dreams who, like many of the young men and women of ’68, want life to be lived differently.”

The film’s producer Maria Bruno echoed Salles’s sentiments, saying it was gratifying to see the work continue to travel given the complexity of the production.

“The making of the film was a long and challenging journey, especially securing the copyrights of the archival footage which included more than 30 different sources,” said Bruno. “As the producer, I am thrilled that the documentary is still echoing in Brazil and abroad after premiering at Panorama at Berlin Film Festival last year.”