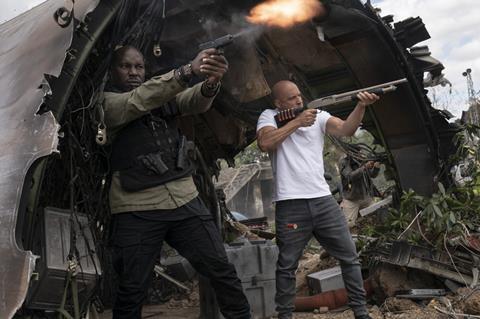 Mexico, a traditionally strong market for the Fast franchise, saw the film debut with a chart-topping $10.9m, setting a record there for a pandemic-era opening.

In the UK and Ireland, Fast & Furious 9 revved out of the starting grid with $8.3m over the first four days. Previously, the biggest UK and Ireland opening of the pandemic era was Tenet last August, with $7.4m earned over five days.

F9 opened in 22 new territories at the weekend, taking the total release markets to 45. The film opened at number 1 in all its fresh markets. Other high spots were Brazil, with $2.6m for the weekend, and Central America and Colombia both with $1.8m. Norway opened with $1.1m, the second-biggest debut of the Fast franchise in the Nordic territory, just below Fast & Furious 7.

Australia was the top holdover market, with a $2.8m second session. That’s a notable dip from its $6.6m opening there, but the country is facing fresh restrictions and closures because of spiralling Covid-19 cases. Total after 11 days in Australia is $11.1m.

Fast & Furious 9 next lands in Spain this Friday (July 2), with France, Germany, Italy and Japan all to follow.

A Quiet Place Part II is now playing in 48 territories, representing 83% of the international rollout. On a like-for-like basis, the film is running 12% ahead of the pace set by the original A Quiet Place.

The three new territories delivered a combined $1.47m, led by Netherlands with $680,000. Top holdover markets were South Korea with $1.4m it its second weekend (down 51% from the opening session) and China and France both with $1m. In France, the film dipped just 28%, and the total so far is $3.1m.

The original A Quiet Place grossed $188m in North America, $153m in international, and $341m worldwide. There are 17 markets yet to open A Quiet Place Part II, including Germany this week and Brazil on July 22.

Cruella was boosted by a chart-topping opening in France (where the film is not available on Disney+ because of the country’s media chronology laws), with an estimated $2.2m. Cruella’s French opening was the equal-second-biggest of the pandemic era, behind The Conjuring: The Devil Made Me Do It and level with Demon Slayer: Mugen Train. France currently operates with 66% capacity restrictions, although this is set to change to 100% on Wednesday.

Disney also has Pixar animation Luca on release – in 12 territories where Disney+ does not operate – grossing an estimated $4.5m for the weekend period and taking the total after two weekends to $11.6m.

There was one new opening, Hong Kong, which delivered an estimated $800,000. Holdover territories dropped by 27% overall, although there were wild differences, with Poland, Czech Republic, South Africa and Hungary all showing gains, and Israel dipping just 9%. Luca remained top of the Russian box office, where it has grossed $3.8m so far. Other top territories are South Korea ($2.0m), Saudi Arabia ($1.3m) and UAE ($1.0m). Top new title at the global box office arrived courtesy of Tencent Pictures in China: 1921, which tells the story of the founding of the Communist Party in China. The historical drama, which officially opens on July 1 to commemorate the 100th anniversary of the party’s founding, played previews at the weekend, generating $11.5m according to Artisan Gateway figures. (1921 doesn’t feature in our worldwide box office chart above because Comscore doesn’t publish box office data until after a film’s official opening.)

1921 is co-directed by Huang Jianxin (recent titles as director or co-director include patriotic dramas Mao Zedong 1949, Beginning Of The Great Revival and The Founding Of A Republic) and Zheng Dasheng (Bangzi Melody). The film features many Chinese stars appearing in cameos as key figures in Communist history.

Elsewhere at the China box office, Taiwanese romantic drama Man In Love held strongly in its third session with $5.3m, taking the total after 17 days to $27.2m. The film – which is a remake of a 2014 South Korean romantic drama about a low-level gangster who learns he has a terminal illness and falls in love for the first time – has grossed $41.7m worldwide so far including $14m in Taiwan.