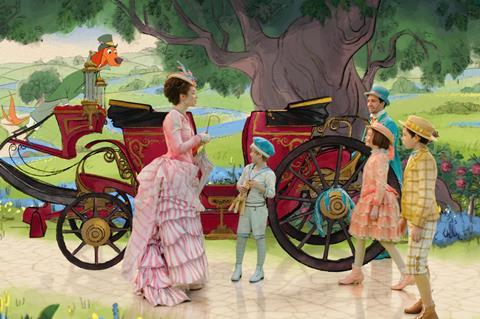 Mary Poppins Returns has surged to a third straight weekend on top of the UK box office, after engaging audiences all through the Christmas/New Year holiday.

Yorgos Lanthimos’ historical comedy The Favourite took £2.2m across its first weekend in cinemas and is at £4m total. Starring Olivia Colman, Rachel Weisz and Emma Stone, the title had already become Lanthimos’ highest-grossing in the UK before Friday, after a release on New Year’s Day and previews prior to that. It scored a decent site average of £4,069, and will look to build on awards success – including at last night’s Golden Globes - to secure a strong run throughout the start of the year.

Another Globes winner, Bohemian Rhapsody, was the only holdover in the top ten to record an increase on its previous weekend. It went up 10% in its 11th weekend, taking £724,000 for a £48.4m total. It has now passed the £48m lifetime of The Greatest Showman, another hit Fox musical.

André Rieu’s 2019 New Year Concert From Sydney, the latest concert cinema screening from the Dutch violinist, has taken £1.749m across two days with several sites still to report. This breaks Rieu’s own record for a concert cinema release in the UK, going past the £1.723m lifetime of last summer’s André Rieu Maastricht Concert AMORE.

It was the number three title at the box office on Saturday and number two on Sunday, taking fourth place across the three days overall (with no screenings on the Friday).

Transformers prequel Bumblebee took fifth spot on the chart, taking £1.7m for a total of £9.1m after two weeks. It will look to soon pass the most recent of the franchise, 2017’s Transformers: The Last Knight, which took £9.5m in the UK.

Welcome To Marwen, Robert Zemeckis’ comedy-drama starring Steve Carell as a man who creates a fictional village to help with his PTSD, opened to £241,713, including £97,198 in previews after an official launch on New Year’s Day.

A busy period for documentary distributor Dogwoof includes opening Ruth Bader Ginsburg film RBG to £36,883 with a £1,756 average, with some sites still to report.

After four weeks, free-climbing doc Free Solo has hoisted its way past the £1m mark – an impressive total across the congested Christmas weeks.

Three Identical Strangers is up to £378,448; all three titles are on the 2019 Oscars documentary shortlist.

Holmes And Watson, Etan Cohen’s comedy adventure starring Will Ferrell and John C. Reilly, added £350,000 and is up to £2.4m.

The BFI’s releasing division played Michelangelo Antonioni’s 1975 thriller The Passenger in 8 locations for a total of £13,469.