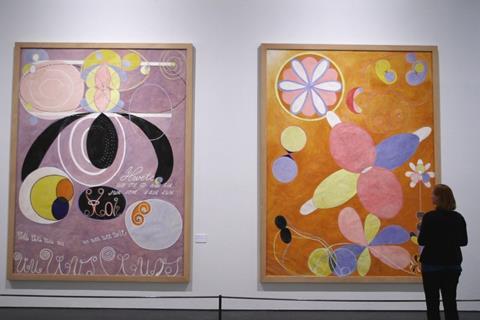 ‘Beyond the Visible: Hilma af Klint’

Eve Gabereau’s Modern Films has secured UK and Ireland rights to documentaries Beyond The Visible: Hilma Af Klint and Raise Hell: The Life And Times Of Molly Ivins, and plans to release both this autumn.

The agreement for Beyond The Visible was closed with German sales agency Mindjazz Pictures and Modern Films is set to release the film on October 9 to coincide with international art event the Frieze Art Fair.

Marking the feature debut of director Halina Dyrschka, the documentary centres on Swedish artist Hilma af Klint, widely considered as the first Western abstract artist, and aims to dispel her mischaracterisation by a patriarchal society.

The film debuted at Gothenburg in 2019 and went on to be selected for CPH:DOX, Hot Docs and Vancouver film festivals. It was released in the US by Zeitgeist Films with Kino Lorber.

Modern Films closed the deal for Raise Hell: The Life And Times Of Molly Ivins with production company The Molly Ivins Project, in consultation with consultant Bridget Arsenault who will also work on the local campaign.

Directed by Janice Engel, the documentary centres on US journalist Molly Ivins, a Pulitzer Prize-nominated writer who rallied against government corruption and whose regular column was carried in around 400 newspapers at the height of her popularity.

The film debuted at Sundance in 2019 and received the audience award at SXSW before being selected for San Francisco, Seattle and AFI Docs film festivals. Modern is planning an October 23 release to coincide with coverage of the US election. It was previously released in the US by Magnolia.

Gabereau said the acquisitions were in keeping with her company’s ethos to support female voices in cinema, as both films are directed by women and each chronicles the life of strong women in history.

The distributor’s upcoming slate of releases also include Rubika Shah’s White Riot, Malou Reymann’s A Perfectly Normal Family and Zeina Durra’s Luxor, which debuted at Sundance and will screen as part of the virtual Sundance London this weekend.

It will also handle the December release of Viggo Mortensen’s Falling, which debuted at Sundance, received a Cannes 2020 label and has been selected to screen at Toronto and San Sebastian.