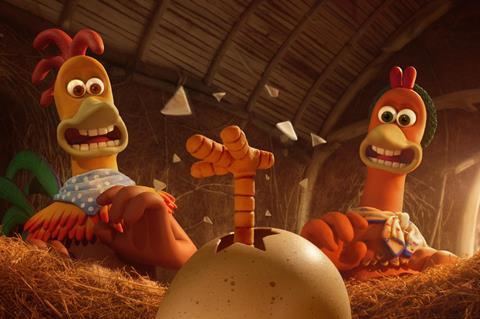 ‘Chicken Run: Dawn Of The Nugget’

Netflix and UK animation studio Aardman’s creative partnership has been cemented with the unveiling of a new Wallace & Gromit feature directed by Nick Park, plus details and a first-look image of the upcoming Chicken Run sequel.

Wallace & Gromit and Chicken Run creator Park will direct the new Wallace & Gromit feature, alongside Aardman’s creative director of Wallace & Gromit, Merlin Crossingham, with Mark Burton on board to write and Claire Jennings producing. In the film, Gromit is concerned that Wallace has become too dependent on his inventions, as proven when Wallace develops a ‘smart gnome’, with a mind of its own.

The as-yet-untitled project is set for a 2024 release, and will premiere on Netflix around the world, apart from in the UK, where it will debut on the BBC before heading to Netflix.

The Chicken Run sequel, which Netflix boarded in 2020, will be called Chicken Run: Dawn of the Nugget. Production is underway, with the film to be released on the streaming platform in 2023. It follows the birds as they attempt to break into an impenetrable fortress.

Wallace & Gromit’s last feature was 2005’s Wallace & Gromit: The Curse of the Were-Rabbit, which won the Oscar for best animated feature. The characters first appeared in 1989 short film A Grand Day Out, then in subsequent Oscar-winning shorts The Wrong Trousers and A Close Shave.