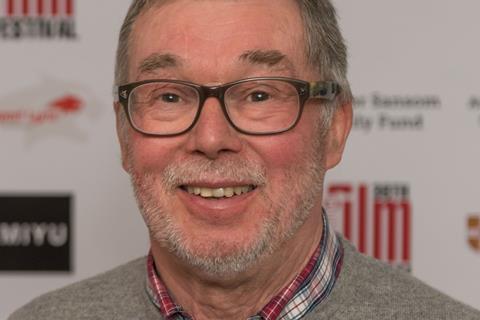 Tony Jones, co-founder of the Picturehouse cinema chain, is to receive the Exhibition Achievement Award at the 2019 Screen Awards.

He will receive the prize, sponsored by the UK Cinema Association (UKCA), at the ceremony on November 28 at The Ballroom Southbank in London.

The rest of this year’s Screen Awards nominees have been announced here.

Jones’ first major role was as co-founder of legendary Birmingham venue the Arts Lab in 1968. Jones ran the cinema programme (alongside the late Pete Walsh), kicking off with the first ever screening of Haskell Wexler’s Medium Cool in the UK, and went on to programme the venue’s annual film festival from 1972.

Jones left in 1979 to become programming manager for the Arts Cinema in Cambridge – the city where he is still based – with the venue going on to become the most successful venue outside of London for foreign-language and independent titles.

In 1989, alongside entrepreneur Lyn Goleby, Jones co-founded City Screen Limited when it bought the Phoenix in Oxford. The group would go on to acquire and build cinemas in cities such as London, Cambridge, Edinburgh, Brighton and York, forming what became the Picturehouse chain.

Jones stepped down from running Picturehouse in 2005 to concentrate on running the Cambridge site and the city’s film festival, but still held a minority stake in the group. Picturehouse was acquired by Cineworld in a £47.3m deal in December 2012.

Jones has been director of the Cambridge Film Festival since 1981, welcoming filmmakers such as Francesco Rosi, Robert Bresson, Michael Winterbottom and Michel Gondry to the event. Jones is stepping down after more than 35 years at the helm following this year’s festival, which ran October 17-24.

Welcoming today’s announcement, UKCA chief executive Phil Clapp said: “In looking each year for a worthy recipient of our Achievement Award, we try to find someone who has made a significant impact on the UK cinema business, and without whose influence the sector would be very different than the one we see today. By those criteria, it is hard to think of anyone more suitable than Tony Jones.

“For almost 40 years, Tony has been a towering figure in UK cinema exhibition, most notably with the foundation of City Screen with Lyn Goleby in 1989, an event which gave rise to the establishment of Picturehouse Cinemas. That company has undoubtedly changed the experience of cinema for countless audience members across the country, and had a wider impact on perceptions of local cinema on its community.

“As Tony steps back from his long association with the Cambridge Film Festival, now seems the right time to acknowledge Tony’s incredible contribution to our sector.”