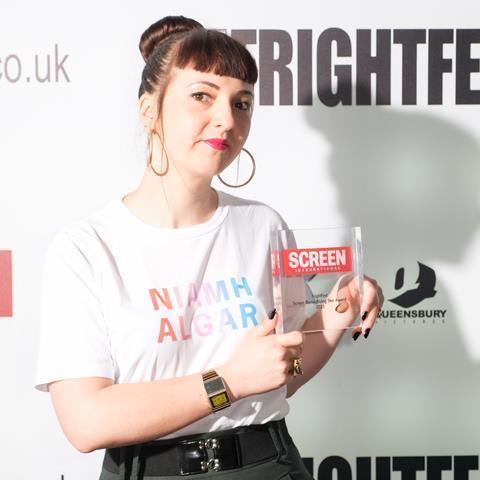 Bailey-Bond received the award in person on Monday, August 30 at the Cineworld Leicester Square in London. The psychological horror is set in 1985 and follows a film censor who, after viewing a familiar video nasty, sets out to solve the past mystery of her sister’s disappearance.

The film had its world premiere this year at the Sundance Film Festival and screened at the Berlinale 2021 as well as at the Sarajevo Film Festival earlier this month,

Helen Jones of Silver Salt Films produced the film. It was developed by the BFI, Film4, Creative England via the BFI Network and Ffilm Cymru Wales.

Screen’s contributing editor Nikki Baughan said, “With this year’s shortlist being as strong as ever, it takes a truly special talent to be crowned our Screen International FrightFest Rising Star of 2021. With Censor, writer-director Prano has created a truly exceptional film that leaves an indelible mark on first watch and reveals ever more of itself on multiple viewings; an impressive feat for any filmmaker, let alone one making her feature debut”.

The Genre Rising Star award was established by Frightfest and Screen International in 2016 to celebrate the work of emerging UK genre talent.

Shortlisted for the award were directors Leroy Kincaide for his feature debut, The Last Rite, and writer-director Eric Steele for Boy #5. Actresses April Pearson from James Patterson’s The Kindred and Najarra Townsend in Jill Gevargizian’s The Stylist, which she also produced were also among the shortlisted nominees.