Projects from Colombia, Lebanon among winners at 2021 European Work in Progress 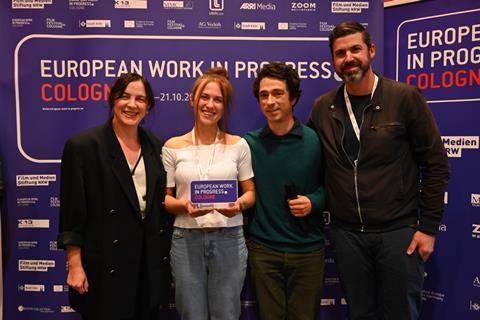 Projects from Chile and Lebanon were among the seven prize-winners at the fourth edition of European Work in Progress (EWIP), held in Cologne from October 19-21.

Two awards of stage and room rental services by MMC Studios in Cologne were presented to Lebanese writer-director Cyril Aris for his documentary Dancing On The Edge of A Volcano; and Chilean-born Francisca Alegria’s debut feature The Cow That Sang A Song About The Future.

Dancing On The Edge of A Volcano, produced by Katharina Weiser of Leipzig-based Reynard Films with Abbout Productions in Beirut, follows the journey taken by Lebanese filmmaker Mounia Akl and her producer Myriam Sassine to shoot her first feature Costa Brava Lebanon after the film’s pre-production was abruptly curtailed by the port explosion in Beirut in August 2020.

Akl was subsequently able to go into production and the completed film premiered at this year’s Venice Film Festival in the Orizzonti section.

The Cow That Sang A Song About The Future, which marks the first co-production collaboration between France’s Cinema Defacto and Germany’s Match Factory Productions, had been developed over the past five years, including participating in the Sundance screenwriter’s and director’s labs. It is expected to be delivered by the beginning of 2022.

And Berlin-based agency ZOOM Medienfabrik will be offering international festival PR services to Russian-Georgian co-production Nina by Oksana Bychkova, starring Yulia Peresild – who shot in space at the ISS space station with director Klim Shipenko last week - and Evgeny Tsyganov, whose credits include Red Sniper and The Man Who Surprised Everyone.