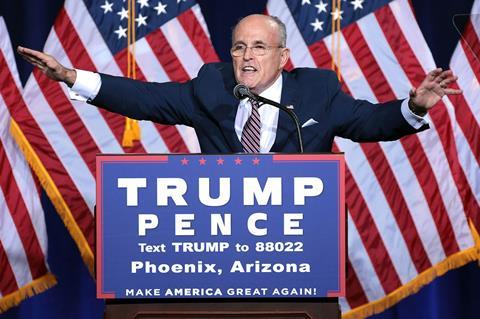 MRC Non-Fiction and Rolling Stone are in production on a documentary about the career of Rudy Giuliani, Donald Trump’s embattled former attorney who was once the beloved mayor of New York City.

The feature is based on the 2020 article What Happened To America’s Mayor? by Seth Hettena and reflects on the fall from grace of the man whose response to the September 11 attacks nearly two decades ago turned him into a national hero and earned him the nickname “America’s Mayor”.

MRC Non-Fiction is producing and financing the documentary which has been earmarked for a 2022 release.

“Zach and Gabrielle are both thoughtful storytellers who have had incredible success telling rich stories about complicated characters,” said Amit Dey, head of MRC Non-Fiction. “Of all the things one can say about Rudy Giuliani, ‘complicated’ may be an understatement but Seth’s article captured the essence of what we believe is a true American epic, from Flatbush to Four Seasons Landscaping, regardless of where it ends.”

“Rarely has a public figure in America fallen so far so fast in the public eye,” added Jason Fine, Rolling Stone’s director of content development. “As we’ve reported on Rudy’s downfall – his bizarre political maneuvering, shady business dealings, and now, being under criminal investigation by the same U.S. Attorney’s Office in Manhattan that he once ran – we see his story as a parable for the dark forces that have shaped American politics.”