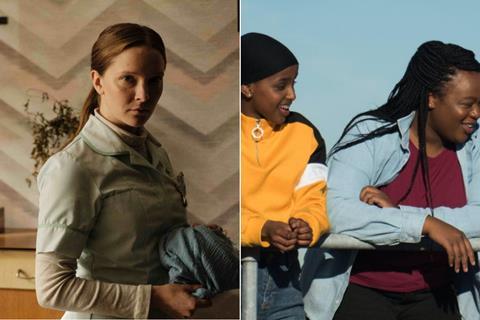 Rose Glass’ debut feature Saint Maud heads the nominations at the 41st London Critics’ Circle Film Awards, with eight nominations including film of the year and director of the year.

The three most-nominated titles were all directed by women, with five nominations for Chloé Zhao’s Nomadland.

Netflix led the list of distributors with 22 nominations, followed by the BBC with 11 and Altitude with 10.

The nominations were announced online by actors Darci Shaw and Henry Lloyd-Hughes, who will star together in Netflix’s Sherlock Holmes series The Irregulars, which is scheduled for release later this year.

The release date eligibility period for this year’s awards was extended to March, as long as films had been screened in 2020 to critics or at festivals. 224 films were named on the ballots, out of which 49 were nominated.

“This additional eligibility has put an extra strain on our members this year, watching more films than usual,” said Rich Cline, chair of the Critics’ Circle Film Section.

The awards will be presented virtually on Sunday February 7, with a physical event held later in the year at a date to be confirmed.

Foreign-Language Film Of The Year

The Attenborough Award British/Irish Film Of The Year

Aaron Sorkin - The Trial Of The Chicago 7

Vanessa Kirby - Pieces Of A Woman

Ellen Burstyn - Pieces Of A Woman

Sacha Baron Cohen - The Trial Of The Chicago 7

British/Irish Actress Of The Year (for body of work)

Vanessa Kirby - Pieces Of A Woman, The World To Come

British/Irish Actor Of The Year (for body of work)