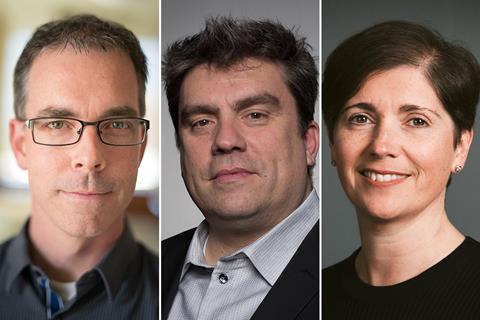 The next session in our Screen Talks webinar series takes place on Thursday, May 28, at 20:00 BST, and will look at how the VFX community is continuing to innovate and stay productive during the Covid-19 crisis.

Topics will include: how VFX companies have adapted to working remotely, and when staff might return to offices; how the sector has dealt with the current shutdown in production and potential boom in the autumn; and how VFX could enable ‘remote productions’ in the future.

Framestore is an Oscar, Emmy and BAFTA-winning creative studio that was founded in London’s Soho in 1986, and now has facilities in London, New York, Los Angeles, Chicago, Montréal, Mumbai and Beijing. Its upcoming projects include Mulan, Wonder Woman 1984, No Time To Die, The King’s Man and season two of His Dark Materials.

ILM is part of the Lucasfilm empire founded by George Lucas in the late 1970s to deliver the effects on Star Wars. Since those humble origins on a parking lot north of Hollywood, the company ballooned and has gone on to work on not just the entire Star Wars universe but the Indiana Jones and Jurassic Park franchises, and tentpoles from the Marvel Cinematic Universe. Recent and upcoming productions include No Time To Die, Black Widow and A Quiet Place Part 2.

Rob Bredow runs ILM and oversees creative strategy and global operations. He was visual effects supervisor and co-producer on Solo: A Star Wars Story, for which he earned Oscar and BAFTA nominations, leveraging his background in technology to create grounded images with a unique shooting style designed for the film. He was chief technology officer, vp of new media and head of advanced development group at Lucasfilm, and before that was chief technology officer and visual effects supervisors at Sony Picture Imageworks.

David Conley is an executive visual effects producer who leads Weta Digital’s VFX film production, and also oversees global client relations and strategic partnerships. He guided the company through expansion and its work on the likes of the last two Avengers films, The Jungle Book and Gemini Man. Prior to Weta Conley was a VFX producer on films such as Cloverfield, Life Of Pi, and Pirates Of The Caribbean: On Stranger Tides, and part of the executive film production teams at Paramount and 20th Century Fox.

Fiona Walkinshaw has overseen the expansion of Framestore’s film division as the company undertook complex projects such as Harry Potter And The Prisoner Of Azkaban and the Oscar-winning Gravity, on which she served as executive producer. She manages a global team of creatives working at every stage of production, from concept art, previsualisation and virtual production through to the final delivery of world-class VFX and animation.