‘Shang-Chi And The Legend Of The Ten Rings’ shatters Labor Day record on four-day $94.4m 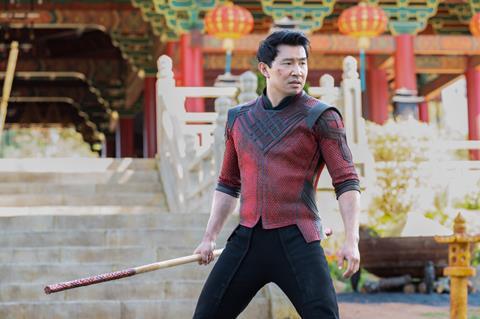 UPDATED: In a debut that recalls pre-pandemic days, Shang-Chi And The Legend Of The Ten Rings – featuring Marvel Cinematic Universe’s first Asian superhero – smashed the Labor Day box office record as a confirmed $94.4m debut over four days more than tripled the previous mark of $30.6m set by Halloween in 2007.

Disney’s latest release in 4,300 cinemas closed out the summer season in style and shows the studio can launch a Marvel film – even one without an A-list lead – at any point in the year and make a splash.

The exclusive 45-day theatrical run bodes well for the weeks ahead with no alternative viewing platform for audiences until mid-October. It is unclear which platform it goes to immediately after 45 days.

‘Shang-Chi And The Legend Of The Ten Rings’: Review

The franchise-elect grossed $75.5m over the Friday-Sunday session to deliver the second best three-day opening weekend of the pandemic behind stablemate Black Widow ($80.4m) and ahead of Universal’s F9 ($70m). It also ranks as the third highest September debut behind It ($123.4m, 2017) and It: Chapter Two ($91.1m).

Saturday’s $23.2m gross was the second highest of the pandemic era, roughly $100,000 behind Black Widow. Disney did not disclose the audience’s ethnic make-up, however roughly 61% who saw it were male and 39% female. The dominant age group was the 18-24 bracket on 33%.

Combined with $63.1m from international markets Shang-Chi generated a $138.6m global three-day weekend, rising to an estimated $157.5m over four.