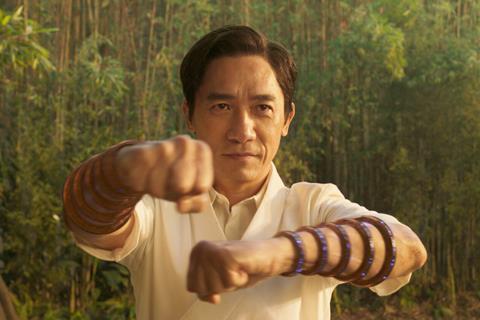 UPDATED: The power of the Marvel brand has once again trumped the lesser profile of the original source material with the global box office for Shang-Chi And The Legend Of The Ten Rings.

Marvel’s latest film – adding the Disney-owned studio’s super-powered twist to the Asian martial arts genre – has debuted with  $75.5m in North America, $63.1m in international territories and $138.6m worldwide. Adding in the four-day Labor Day US holiday the global tally is  estimate for Labor Day holiday Monday in the US, that adds to a $157.5m global opening.

For comparison, Black Widow – which had the advantage of greater existing awareness for its character – opened with $159.2m worldwide in early July. That film was available simultaneously on Disney+ Premier Access, which doubtless contributed to its rapid erosion at the box office. Shang-Chi, in contrast, is a pure theatrical play at this stage.

Shang-Chi has yet to open in China, and also most of south-east Asia where cinemas remain closed.

This coming weekend sees Shang-Chi arrive in Greece. The China release date is still to be confirmed.

‘After We Fell’ makes strong start in Germany, Russia, Spain

After We Fell, the third film in the YA series that began with After (2019) and After We Collided (2020) has begun with a robust estimated $9.2m in 31 international territories. The Voltage Pictures titles are based on novels by Anna Todd, and star Josephine Langford and Hero Fiennes Tiffin as two people – initially college students – enjoying a tumultuous relationship.

After We Fell opened at the top of the Belgian box office, and in second place (behind Shang-Chi) in multiple markets including Germany, Spain, Russia/CIS, Netherlands, Austria and Mexico.

Top five markets were Germany (an estimated $1.9m for local distributor Constantin), Russia/CIS ($1.5m for Volga), Spain ($1.2m for Sun/Diamond), Netherlands ($673,000 for Belga) and Poland ($583,000 ). The Polish number is 50% of the total achieved by After We Collided. Amazon Prime Video has France and UK distribution rights.

Despite fierce competition from its own new Marvel title, Disney’s Free Guy exhibited strong staying power in its fourth weekend of release. The Ryan Reynolds starrer posted an estimated three-day $8.7m in North America (down 36%), or $11.2m including the Labor Day holiday, and $25.3m for international (down 33%).

Warner Bros’ Malignant, directed by James Wan, has begun with an estimated $2.4m in 24 early markets – representing 38% of the film’s global footprint. An additional 45 markets are set to open this week, including North America, Russia, UK/Ireland and Latin America.

Malignant is written by Akela Cooper, who has writing credits on Marvel TV series Luke Cage and Avengers Assemble, from a story by Cooper, Wan and his Romanian-born actress wife Ingrid Bisu.

Paramount’s Paw Patrol: The Movie is showing strong traction in the global box office chart – in fourth place for the weekend, grossing an estimated $4.0m for North America and $7.1m for international. Global total is now $80.6m.

The international weekend number was boosted by the film’s opening in Poland, grossing a hefty $1.6m. The UK delivered an exceptionally strong hold (down 22%), as families took the chance to see the film on the last weekend of the summer school holiday.

Next to open the film are Brazil this Thursday (September 9) and Australia on September 16.