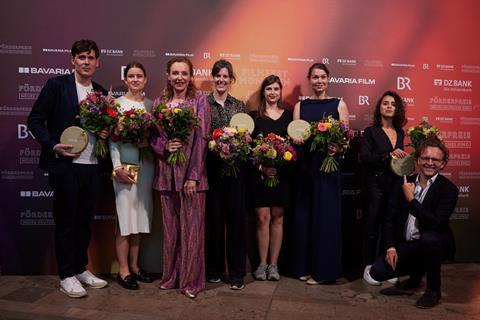 Sophie Linnenbaum’s sci-fi satire The Ordinaries was one of the big winners at this year’s Filmfest München, picking up the German Cinema New Talent Award for best director and best producer for Britta Strampe and Laura Klippel of the Berlin-based production house Bandenfilm.

The Ordinaires is Linnenbaum’s graduation film from the Film University Babelsberg.

“You have to rub your eyes in amazement: this is supposed to be a graduation made at a university? The Ordinaries has what feels like a multimillion-dollar budget,” enthused the jury of producer-director Sönke Wortmann, actress Almila Bagriacik and producer Ingo Fließ.

The jury praised them for producing a film “that is both entertaining and clever.” They also predicted “a great future” for Linnenbaum who had been prevented from attending her film’s world premiere last Monday ( June 27) after contracting Covid. However, she was able to accept her award in person on Friday evening (July 1) at the awards ceremony in the main hall of Munich’s HFF film school, and then travelled on to Karlovy Vary at the weekend for the film’s international premiere in the Czech festival’s Crystal Globe Competition.

International sales for The Ordinaries are being handled by The Match Factory, while Hamburg-based notsold will release the film theatrically in Germany in co-operation with Port au Prince Pictures.

Meanwhile, the New Talent Award for best screenplay went to Florian Plumeyer and Katharina Woll for their collaboration on Woll’s debut feature Everybody Wants To Be Loved which is also her graduation film from Berlin’s German Film & Television Academy (DFFB). Director Naira Cavero Orihuel accepted the award for best acting performance on behalf of Lena Schmidtke, the lead actress in her graduation film from Munich’s HFF, Rage At Kuba.

A day later, a flurry of awards was resented in the ASTOR Film Lounge ahead of the German premiere of the Spanish comedy The Good Boss as the Filmfest’s closing film for the 2022 edition.

The CineRebels award in the new section and competition for format-busting and experimental films went to Czech director Mira Fornay’s Cook F**k Kill for her “highly authentic description of toxic relationships”.

Meanwhile, the Fipresci prize for a film screening in the New German Cinema section was awarded to documentary filmmaker Claudia Müller’s Elfriede Jelinek - Language Unleashed which offers a visual take on the Austrian author’s technique of linguistic montage.

A new award was presented at the festival’s Kinderfilmfest with the Cinekindl Award going to Swedish director Sanna Lenken’s Comedy Queen and an honourable mention to Joya Thome for her documentary One In A Million.

The last day of the festival saw the final votes being counted for the two audience awards, with the Bayern 2 and SZ Audience Award going to Hanna Doose’s Kiss My Wounds, and the Kinderfilmfest Audience Award to Michael Krummenacher’s The Robber Hotzenplotz which will be released in German cinemas by Studiocanal on December 8, 2022.