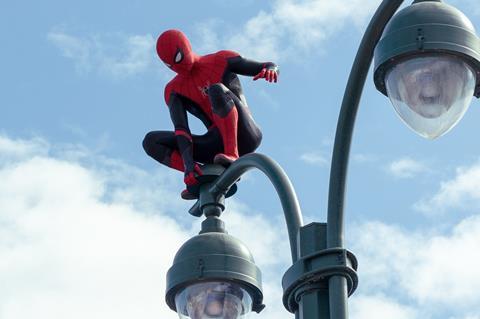 Columbia Pictures’ Spider-Man: No Way Home became Sony Pictures’ highest-grossing film of all-time on Tuesday (December 28) as a $49.7m global haul propelled the tentpole past the $1.13bn mark set by Spider-Man: Far From Home to reach $1.16bn after 14 days.

Spidey defied pandemic concerns and tight restrictions amid the worldwide Omicron spread and grossed $21.3m on Tuesday from 4,336 North American locations to become the third fastest film of all time to cross the half-billion mark as it settled on $516.4m after 12 days.

Remarkably No Way Home has not opened in China, where it remains unset. The huge box office market, which has become the world’s biggest since the pandemic began, delivered some $199m for Far From Home and contributed around $64m for No Time To Die this year.

While No Way Home has overtaken the $613m mark established by No Time To Die to rank as Hollywood’s biggest international release – let alone North American release – of 2021, China still has bragging rights with the three highest grossing films at the international box office this year. The Battle At Lake Changjin, Hi, Mom and Detective Chinatown 3 have amassed approximately $903m, $822m and $686m, respectively.