This Way Up conference: 78% see cinema as "expensive activity"

Statistics presented at UK cinema conference also revealed that 51% of audiences believe the cinema experience does not justify the overall expense. 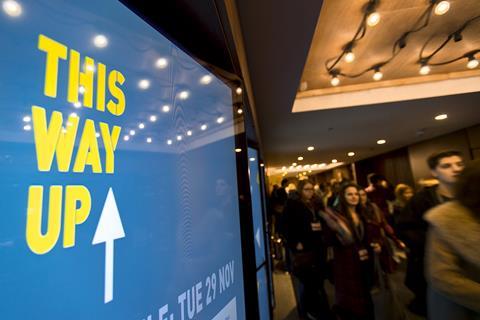 Tanya Easterman, senior relationship manager at Cinema First, the cross industry body which runs the Meerkat Movies promotion, has warned that cinema-going is perceived by audiences as a prohibitively expensive activity, something which poses a signficant challenge to the sector.

Presenting new research conducted by the company during a session at UK cinema conference This Way Up at Glasgow Film Theatre on November 30, Easterman began on a positive note: “The proportion of people who have claimed to have visited the cinema over the last quarter was up 23% (over the previous quarter), that’s reflective of the film slate at the moment.”

The same figure for specifically the month of October was 49%, up 7% year-on-year, she added.

Easterman proceeded to analyse the drivers of cinema visits. “The overall cinematic experience is the most important factor, other drivers include visuals, sound effects, ticket offers and discounts,” she said.

“However, overall attitudes haven’t seen much change over the last year, this is a little bit concerning,” she continued. “We still have work to do around perceptions of price,” she said.

“48% agree that the cinema is still the best place to watch films, but 51% still don’t think the cinema justifies the experience of the overall cost of that visit.”

That overall cost also factors in parking and confections, she added.

“The crucial point here is that 78% see cinema-going as an expensive activity, this is measured against other leisure activities. If we’re looking at how people want to spend their money and their time, cinema is perceived as expensive,” she warned.

“Cost is still the main barrier to infrequent cinema visitors. As an industry we need to look at what we are going to do to battle the perceptions of it being expensive,” she added.

Easterman talked up the success of the Meerkat Movies promotion that her company runs with price comparison website Compare The Market.

“We’ve had 3.5m memberships created to date, of those 1.8m are active [the initial membership only lasts for a year and needs to be renewed]. Of those we have had 10m voucher requests, which have translated into 4.7m redemptions over the last 18 months. That counts for 9.4m admissions,” she said.

“In the summer we were getting the same level of redemptions that we were getting with Orange Wednesdays [the previous incarnation of the promotion] at its peak, which is pretty phenomenal,” she continued.

“Compare The Market spent £128m marketing Meerkat Movies in the first year. To put that into context, Orange spent £8m in its heyday, and UK distributors spend on average around £160m on above the line marketing to promote their films,” she added.

Cinema First is an organisation dedicated to increasing cinema admissions profitably in the UK. Its main constituents are film distributors, via the Film Distributors Association (FDA) and exhibitors, through the UK Cinema Association.

Read: This Way Up 2016 wrap: ticket prices, audiences, virtual reality in the spotlight