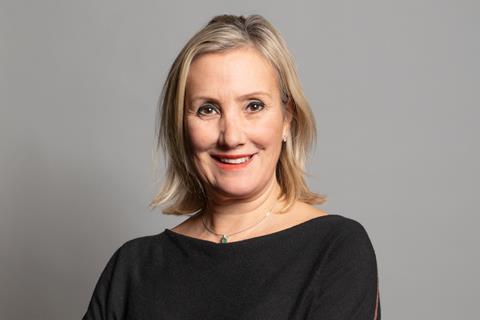 Caroline Dinenage is the Minister of State at Department for Digital, Culture, Media and Sport (DCMS). She talks to Screen about the UK government’s film and TV Production Restart Scheme (PRS), which has supported 52 independent films since it was set up in July 2020 according to statistics published today.

Given the success of the Production Restart Scheme, is the government considering extending it beyond the end of this year?
Caroline Dinenage: It has been absolutely brilliant to see the success of the Restart Scheme and the huge difference it has made to the sector over the past year. Despite the many challenges the pandemic has presented, the sector achieved the third highest spend (£1.19 billion) for any quarter at the end of last year – this is amazing news.

In response to the changing nature of the pandemic, the scheme has been extended to provide indemnity for the remainder of 2021 and we are continuing to work closely with industry stakeholders to assess their needs and make sure the terms of the scheme remain appropriate.

UK film and TV is booming – we want this to continue long into the future. I am committed to providing appropriate support and remaining in close contact with the sector. Positive feedback about the scheme from producers and the sheer number of productions using the scheme gave us the confidence to extend the scheme further at this March’s budget and support even more jobs in the sector.

What has been the cost to government of running the scheme? If projects are paying 1% of their budgets to use the PRS, has that covered most of the cost or has there still been considerable outlay?
The benefits of the scheme for jobs and investment so far have far outweighed any cost. Thanks to the Restart Scheme, we have been able to support £1.9bn of production investment in the UK. The costs of running the scheme are dependent on the value and number of the claims that we receive and settle. So far we’ve received over 120 claims, and settled the first 31 of those claims, and are continuing to gather details and process the remainder.

We receive fees from the productions when they join, and if they have a claim, they will often make it after they complete filming. Over time we expect more claims to come in and that the scheme will pay out considerably more than the fees received. In addition, the scheme covers losses associated with abandonment up to a cap of £5m. To date, and thanks to the brilliant work by industry to develop safe working protocols, we have not yet seen any abandonments.

Have US studios or streamers used the PRS at all?
I’ve been delighted to see such a huge range of productions using the scheme, such as Mothering Sunday, which premiered at Cannes this month, and well-known TV series including Dr Who and His Dark Materials. The scheme has seen a small number of co-productions register, where US streamers are a co-producer with a UK producer. We want to make sure the scheme is benefitting the sector here in the UK, and at least half of the production budget must be spent in the UK to be eligible for the scheme.

Outside of the Restart Scheme we continue to work hard with industry and the wider sector, including the British Film Institute, to support the long-term development of the whole sector. This includes ensuring that the UK remains the production destination of choice for international studios and streamers, as well as supporting the independent sector.

To that end, the £7m UK Global Screen Fund is supporting the independent screen sector to export more and better compete internationally. And, recognising the skills challenges the sector currently faces, I was pleased to ask the BFI to lead a review to explore how best to address existing and future skills gaps.

Has the recent “pingdemic” increased the number of claims being made?
We track claims closely. While it is too early to say the effect on claims, this is where the scheme is so vital in allowing these productions to film. I saw first-hand the safe working guidance on set when I visited the set of A Christmas Number One and saw how 130 jobs have been supported thanks to the scheme. That number will rise even more when we take into account catering companies and transport firms.

The scheme exists to cover losses associated with cast and crew falling ill with Covid, but also Civil Authority action including lockdowns and self-isolation of close contacts. It makes sure that the impact of increasing Covid incidence in the population is mitigated for productions working hard to complete their shoots.

What is your message for other sectors (for example live theatre and festivals) who haven’t had access to this kind of insurance?
The events sector makes a hugely important contribution to the UK’s cultural economy, and the Covid-19 pandemic has presented significant challenges – that is exactly why we have supported them with our unprecedented Cultural Recovery Fund. We have engaged closely with sectors and listened to their concerns throughout the pandemic.

Step 4 of the Roadmap proceeded as planned on July 19 and we have published guidance on events and attractions to support the reopening of events at Step 4, including theatres and music festivals

As the Secretary of State [Oliver Dowden] made clear at the DCMS Select Committee in May, the government is aware of the wider concerns around securing indemnity for live events and we continue to assess options to provide further support to the sector within the public health context.