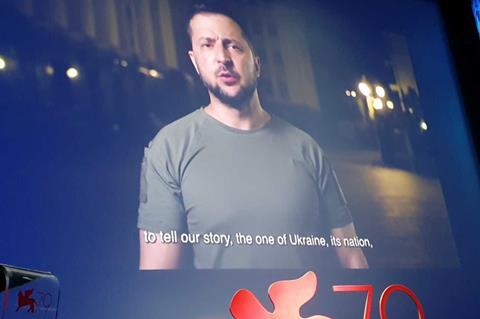 Ukraine’s film community has called for the resignation of Maryna Kuderchuk, head of the country’s main film agency, following allegations of “unprofessional and dishonest actions ….which have led to the deepening crisis in Ukrainian cinema”.

An open letter has been signed by film organisations including the Union of Film Critics of Ukraine and the Ukrainian Guild of Directors and addressed to Ukrainian president Volodymyr Zelensky, prime minister Denys Shmyhal, and minister of culture and information policy Oleksandr Tkachenko, among others.

“We are all ashamed to have the head of [the] State Film Agency liquidating our national film archive, throw[ing] out the prints and sell[ing] the building to developers. This is definitely not the way the government should behave, especially in times of everyday Russian missile attacks,” commented Ivanov.

“It’s a shame for us all to have such a head of the Ukrainian State Film Agency as Marina Kuderchuk, during the war, when Ukrainians show so much dignity in resistance,” the producer continued.

The letter accused Kuderchuk of destroying the system of state regulation of the industry, discrediting the position of a civil servant, and harming Ukrainian society. It claimed an audit by Ukraine’s Accounting Chamber “established that state budget funds allocated for state support of cinematography were planned and used in violation of the law and inefficiently.”

They cited the example of the Ukraine-France co-production STTL which was presented at this year’s Rome Film Festival where it won the audience award. The letter alleged the film’s producers “received a claim from the State Film Agency for violation of non-existent rules that the producers did not have the right to present films at international film festivals without the approval of the State Film Agency and a demand for the return of state support in full.”

“Since, according to the terms of the agreement, participation in international film festivals does not require the approval of the State Film Agency, the Agency’s management exceeds its authority and actually hinders the promotion of Ukrainian films in the world,” the authors of the open letter declared.

The State Film Agency’s administration was also lambasted for its alleged “illegal rejection” of the first foreign project to benefit from the cash rebate scheme introduced in Ukraine to attract international investment into the local economy.

Netflix’s The Last Mercenary, starring Jean-Claude van Damme, was produced in Kyiv in 2020-2021, but the letter alleged “the State Film Agency illegally refused to let the project pass the cultural test, violated its obligations to prepare documents for the meeting of the Council for State Support of Cinematography (Council), and misled the Council about the completeness of the documents.”

Moreover, the letter alleged Kuderchuk had exceeded her official powers in moves to reorganise and transfer the powers of the national film archive at the Dovzhenko Centre to other institutions. “This is a sabotage against the reputation and image of Ukraine, especially at a time when the Ukrainian identity and existence are under attack,” said the letter.

The film industry associations called, among other things, for the dismissal of Kuderchuk and her deputies, the cancellation of the Dovzhenko Centre’s “reorganisation”, as well as the convening of a round table about “the appointment of competent and honest leadership of the State Film Agency.”

Kuderchuk was a controversial choice to head the State Film Agency from the moment she was appointed in January 2020. The film community had expected to see Julia Sinkevych, general producer of the Odesa IFF, take the post.

“For two years, with the pandemic and the war, Marina Kuderchuk just ignored all possible round tables and panel discussions with [the] film community. Since February 2022 there has not been a single programme of support for Ukrainian filmmakers. On the contrary - our main film institution is at war with most of the producers, asking [them] to return the full sum of financing of the films that were presented in international festivals because directors raise their voices against the situation in USFA,” Ivanov told Screen.