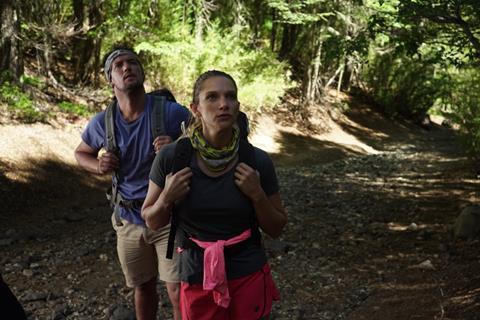 Uncork’d has picked up US, Canadian and Mexican rights to Embryo, the sci-fi horror thriller from Chilean genre specialist and Hidden In The Woods director Patricio Valladares.

Valladares and regular collaborator Barry Keating co-wrote the screenplay about Kevin and Evelyn, a couple camping in the woods whose trip takes a turn for the worse when the woman is abducted and impregnated by aliens.

After Evelyn develops a taste for humans and attacks a doctor, the couple flee for the big city in the hope of expelling the force that has taken over Evelyn’s body.

Valladares and Keating described the Chilean feature as a “twisted hybrid film that plays out as a road movie infused with elements of Species, Breakdown, and found footage”.

When the pandemic halted the final stages of production in Chile and prevented Valladares from filming with his crew, he deployed a novel approach to get Embryo past the finish line.

The director, whose credits include Downhill and Nightworld, layered in old footage from a mountain hiking trip with his wife, and used film from a sightseeing expedition in London during the European premiere of Hidden In The Woods at Frightfest 2012.

The filmmaker shot additional scenes at home without crew using his own kit, including a camera and iPhone. The project from Chile-based Vallastudio Films was produced by Keating, Francisco Inostroza, and Valladares.

“Embryo is a very cool and stylised horror film and Patricio has crafted a nifty little thriller,” said Uncork’d president Keith Leopard. “Right now, some of the best horror is coming from outside the US and I’m thrilled to be working with Patricio on the release next year.”

Keating and Valladares added, “We’re extremely happy to partner with Uncork’d, because Keith and his team are true horror fans that we believe can help our movie to find the best possible audience in North America, and we can’t wait to share it with them, as well as the rest of the world.”

Valladares brokered the deal with Leopard.