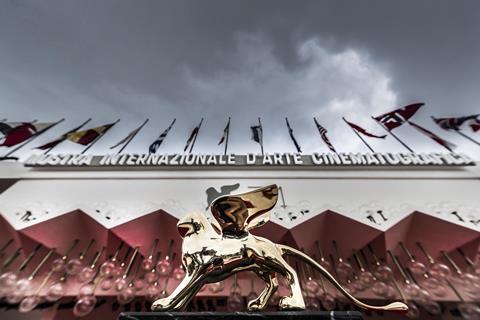 The Venice Film Festival has revealed changes to this year’s edition, imposed as a result of the ongoing Covid-19 pandemic.

The 77th edition is set to go ahead from September 2-12, having avoided postponing, but with “certain changes” to ensure social distancing and other safety measures can be implemented.

These include slightly reducing the number of films in Official Selection to between 50 and 55 titles. The festival has averaged around 60 titles over the past few years.

Around 20 of those will comprise the main competitive section, titled Venezia 77, while other strands will include the Horizons competition, Out of Competition and Biennale College Cinema. But the Sconfini sidebar section has been removed from this year’s edition in order to provide more seats and screenings for films in the main sections.

These screenings will take place in the theatres where they have been traditionally held on the Lido. Two outdoor arenas will also be installed in the city’s Giardini della Biennale and in the skating rink on the Lido.

The Venice Virtual Reality competition will move entirely online, rather than at its planned venue on the island of Lazzaretto Vecchio.

In addition, Venice Classics will take place outside the city in Bologna from August 23-31 in collaboration with the Il Cinema Ritrovato festival. The selection of restored classics and others will be screened in Venice in the following months.

“I am extremely pleased that the Biennale Cinema can be held with a minimum reduction of films and sections,” he said. “Without forgetting the countless victims of these past few months to whom due tribute shall be paid, the first international festival following the forced interruption dictated by the pandemic becomes the meaningful celebration of the re-opening we all looked forward to, and a message of concrete optimism for the entire world of cinema which has suffered greatly from this crisis.”

He stated that the selection would offer “the best that the film industry has produced in recent months, thanks to the extraordinary response by directors and producers, despite the arduous working conditions.”

“A significant number of directors and actors will accompany the films to the Lido, while Internet connections will make it possible to hold press conferences with all those who will be unable to participate in person, due to the travel restrictions that remain in place,” he added.

The full lineup will be announced on July 28.

On the industry side, the 5th Venice Production Bridge will be held as an in-person and on-site event from September 3-11 with its usual elements at the Hotel Excelsior, with certain components also set to take place online. Virtual one-to-one meetings with projects presented in-person will also be organised online for accredited professionals who are unable to travel to Venice.

The Venice Gap Financing Market and Book Adaptation Rights Market will also go ahead as physical events alongside remote platforms for Virtual Reality projects, Final Cut in Venice, market screenings and European Film Forum. Panels and events that take place physically at the Hotel Excelsior will for the first time be streamed on the website of the Venice Production Bridge.