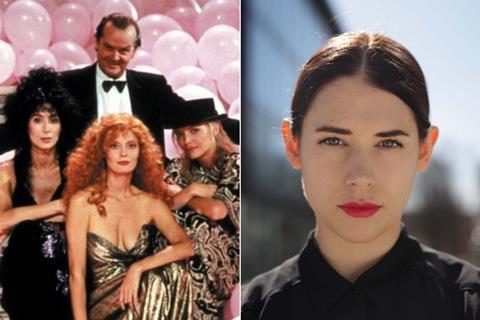 ‘The Witches Of Eastwick’, Ninja Thyberg

Warner Bros has signed Swedish filmmaker Ninja Thyberg to write and direct a remake of George Miller’s 1987 fantasy-comedy The Witches Of Eastwick. Thyberg is presently on the festival circuit with her debut feature Pleasure.

The deal was signed last week for the project, which will shoot in the US at a date to-be-determined. Thyberg is about to start writing the script; it is not yet confirmed if her screenplay will be based on Miller’s version which was adapted by writer Michael Cristofer, or on John Updike’s 1984 novel of the same name on which the first film was based.

Producers on the remake are Doug Wick and former Sony and Warner Bros exec Lucy Fisher, who as a pair have produced titles including the Divergent trilogy, Baz Luhrmann’s The Great Gatsby and Stuart Little 2 (Wick produced the first Stuart Little film as well).

In the story, three single women in a picturesque village have their wishes granted, at a cost, when a mysterious and flamboyant man arrives in their lives.

The 1987 film, also made by Warner Bros, starred Jack Nicholson, Cher, Susan Sarandon and Michelle Pfeiffer. It was nominated for best original score for John Williams and best sound at the 1988 Oscars; and won the Bafta for best special effects the same year.

Pleasure launched at the online Sundance 2021, having originally been selected for Cannes 2020 and then awarded the Cannes Label when the festival did not take place.