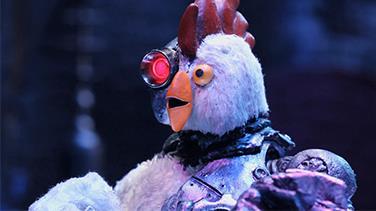 The eighth season of Robot Chicken has just aired and a ninth is on its way. SBS is also readying a second series of Sony/Crackle’s Super Mansion, the cult stop motion animated series in which Bryan Cranston voices the main character Titanium Rex.

In Annecy this week, Marge Dean, general manager of SBS, has given further details of how the company is looking to grow.

Robot Chicken is a sketch comedy and therefore unlikely to receive the feature film treatment. However, SBS already has several properties in development with studios, including Fox and Sony. Robot Chicken writers Senreich, Tom Sheppard and Zeb Wells were announced last year as the team that would script Sony’s new live action/animated feature Rabbids.

Along with its own in-house projects, SBS (which employs 250 people) is looking to work as a company for hire on features.

“I think the guys are ready to take on a new challenge by taking on features,” Dean told Screen. “We have a goal this year to make a feature in our studio. If it’s work for hire, it’s work for hire. If it is one of ours, all the better. We just really want to take that step - we feel it will just open up the whole world for us.”

Getting into features will enable SBS to work on bigger budgets and lengthen its creative footprint.

“Part of what we want to do at Anency is meet international distributors to try to figure out that model and figure out some other ways of funding these movies,” she said.

SBS is best known for stop motion work but has also been enjoying success with such 2D projects as Camp WWE, which shows on the WWE Network. The company is also increasing its CG output and is moving into children’s content. It is currently producing kids’ action-comedy series Buddy Thunderstruck for Netflix.

Also among plans is a VR episode of Super Mansion.

Dean joined SBS last August, coming from toy company Mattel where she was head of the Playground Productions Entertainment Division.