The ascent of Mount Olympus

Basil Iwanyk tells Matt Mueller how his Warner Bros-based Thunder Road Pictures arrived at its first studio tentpole Clash Of The Titans, which is shooting in the UK. 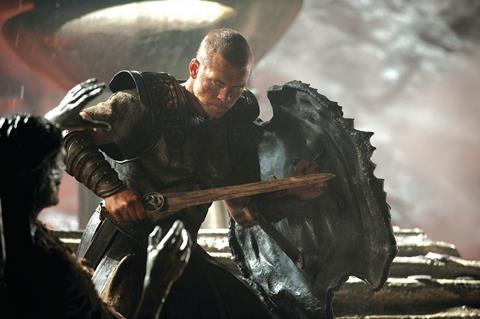 It is undoubtedly a challenge trying to run your studio-based production company from another continent, but that is what producer Basil Iwanyk has been doing since the dark days of winter. In January, he moved to the UK to oversee the immense Clash Of The Titans remake, the biggest project yet for his Warner Bros-based Thunder Road Pictures.

Up until now, the films Iwanyk has produced for the studio - We Are Marshall and Firewall - have been in the $35m-$40m range but the Greek-myth epic is Thunder Road’s first tentpole movie. Spearheading the biggest project of the ex-Warner executive’s producing career meant alternating three weeks a month in the UK with five days back in Los Angeles until his family were able finally to join him in June, while keeping tabs on the dozen or so projects Thunder Road has rolling through development.

Clash Of The Titans’ base camp is Longcross Studios, a tank factory that has been retrofitted into a movie studio, located in the leafy English county of Surrey. With palpable excitement, Iwanyk makes a boyishly enthusiastic tour guide, zipping around the Longcross backlot in his golf cart to show ScreenDaily the immense central soundstage - currently housing a temple set that today is being laid waste by Hades (Ralph Fiennes) - as well as the armoury, props department and a showreel that impresses with the film’s scope and ambition.

“Because it’s a journey movie, we want to make you feel like you went on a major visceral journey across the globe.”

Besides Longcross, the production is also using the water tank at Pinewood Studios and two soundstages at Shepperton for its Mount Olympus sequences. Locations are playing a significant role too: the shoot kicked off in spectacular mountaintop terrain on the island of Tenerife; they are using beaches, forests and an abandoned quarry in Wales that will serve as the entrance to Hell, before wrapping in September in a desolate region of Ethiopia. “We wanted to stay away from what 300 did really well, which is greenscreen, highly stylised,” says Iwanyk. “Because it’s a journey movie, we want to make you feel like you went on a major visceral journey across the globe.”

The idea to reboot Titans came about when Iwanyk was thinking of the films he loved as an avid cinema-going teen and wondering whether any of them would be suitable for a contemporary makeover. Fortuitously, Warner Bros owns the underlying rights to Titans and, with Troy and 300, has shown itself partial to the sword-and-sandal resurgence. With advances in effects technology, it seemed like the perfect time for a revival. Or so Iwanyk thought.

“In this environment, it wasn’t easy to convince the studio to come around to it,” he admits. This movie was never going to be cheap. We had to disabuse them of the notion it was going to be 300 with monsters, and we had to convince them that we didn’t need Brad Pitt to play Perseus. We’ve really lucked out to get Sam Worthington.” Iwanyk’s star is indeed quite the catch, with the leading role in James Cameron’s Avatar set to shoot him to stardom in December.

Securing Lawrence Kasdan to take on his first script-doctoring assignment since The Empire Strikes Back helped to seal the deal. And after original director Steve Norrington departed, Iwanyk managed to sign up-and-comer Louis Leterrier before The Incredible Hulk opened. “We loved how he shot action on the Transporter movies and he obviously was able to work with visual effects in a major way,” observes Iwanyk. “We liked his ambition, we liked his taste and we liked that this was a step up for him.”

While the 1981 original is memorable for Ray Harryhausen’s stop-motion mythological creatures, it is also ensconced in the annals of cinema as a touch cheesy, something Iwanyk and Warner Bros are keen to steer clear of with their reboot. Plot-wise, they are sticking to the original’s take on the Greek myths, but do not expect to see Worthington wearing a mini-toga a la Harry Hamlin.

“We’re trying to marry epic, old-fashioned film-making - huge sets, amazing vistas, real people - with cutting-edge visual effects,” he says. “We want to make it feel as real as possible but at the same time, our movie has to be magical. We have a lot of tips of the hat to the original movie but - in their defence - we have more resources and better technology.”

Iwanyk joined Warner Bros Studios’ junior executive ranks in 1994 and worked his way up, overseeing films such as Insomnia, Ocean’s Eleven and Training Day during his tenure. In 2000, feeling a bit “tired” of an executive’s role (and anonymity) and eyeing a move to producing, Iwanyk left to become president of Intermedia, where he stayed for three years, “The glory years, when we made a tonne of movies, good and bad.”

At Intermedia, Iwanyk loved the international travel, the direct contact with producers, and the variety of projects he was overseeing, from Iris to Terminator 3: Rise Of The Machines. He credits Intermedia with teaching him how to develop films for the global marketplace, not just the US, and the art of selling. “Even though the company didn’t turn out to be what we all expected, it’s made me a much better producer,” he says. I know a lot of ex-executives bomb out as producers because they don’t know how to sell. At Intermedia, we were hustling all the time.”

“I don’t think they’re looking at me to be their romantic comedy guy.”

But when the company hit troubled waters following the collapse of Germany’s Neuer Markt, Iwanyk returned to Warner Bros to set up Thunder Road in 2004. With four production executives and one assistant working alongside Iwanyk, Thunder Road’s first-look deal has so far yielded the aforementioned We Are Marshall and Firewall, while Antoine Fuqua’s police drama Brooklyn’s Finest, which sold to Senator at Sundance this year, was its first independent production.

The company has a packed slate, with Iwanyk seeing Thunder Road’s role as supplying action, adventure and event movies to Warners, “Boy movies,” he laughs. I don’t think they’re looking at me to be their romantic comedy guy.”

The projects closest to fruition include political thriller 28th Amendment - the first script Star Trek screenwriters Roberto Orci and Alex Kurtzman ever sold - which was due to shoot last year with Tom Cruise and Denzel Washington until Cruise walked away, and now has The Lives Of Others’ Florian Henckel von Donnersmarck lined up to direct; spy thriller Brotherhood Of The Rose, with Channing Tatum “loosely” attached; Spook’s Apprentice, a Harry Potter-style adventure movie which Iwanyk hopes to shoot in the UK in spring 2010; A Star Is Born remake that might star Beyonce Knowles; and a remake of Sharky’s Machine which Nick Cassavetes is writing and may direct.

“And,” he laughs, because we’re in the world of ‘I have no shame’, we’re doing the next chapter in The Wizard Of Oz, which will be set in the present day and feature Dorothy’s granddaughter.”

“This is the kind of movie the studio was hoping they’d get from my company.”

With Thunder Road’s hefty development slate, how can Iwanyk possibly keep on top of it all? He cites a lesson learned on We Are Marshall. I loved [the film’s director] McG so much, I loved that process so much that I spent too much time on location and didn’t really pay any attention to the home front and new projects.” It left a one-year gap during which Thunder Road did not produce a single movie. So Iwanyk is not only putting in a full working day on Titans, but as soon as the time-zone change allows, he is on the phone to Los Angeles to keep Thunder Road’s slate humming and growing.

“It’s not as difficult as you imagine, trying to get projects going from London,” he insists. “The hard part is replenishing the coffers with new projects. Thankfully, I have a great staff and a movie that’s going relatively smoothly.” Iwanyk reaches out to touch the wooden coffee table in his Longcross Studio office.

Ask him what his future ambitions are and he says: “I want to make movies that people wait in line for, at this point in my life,” citing his current project - which both he and Warner Bros believe has franchise potential - as the movie that may be the defining moment in his career.

“This is the kind of movie the studio was hoping they’d get from my company,” he muses. “If you can pull off a movie like this, it changes everything. Someone once said to me, ‘If you know how to land a 747, you’ll always have a job because not a lot of people can do that.’ I’m hoping this movie works because, if it does, then I just landed a 747.”