‘All My Friends Hate Me’: Tribeca Review

Comedy and psychodrama intertwine during a birthday blowout among old chums 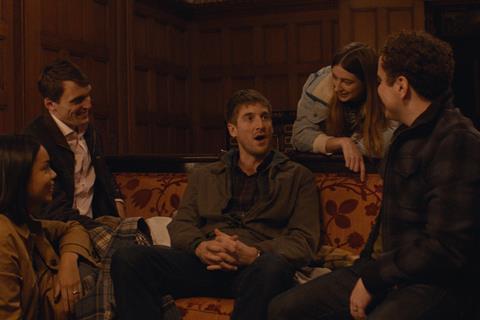 ‘All My Friends Hate Me’

A reunion between college mates at a country house does not go entirely according to plan in All My Friends Hate Me. Director Andrew Gaynord’s first feature veers between toe-curling comedy and unsettling psychodrama. Accomplished in its execution, it never feels quite uproarious enough or sufficiently emotionally engaging to fully realise the potential of the premise, although there is still enough dry amusement and intrigue generated to attract UK interest following a world premiere at Tribeca.

Not quite the wild weekend the viewer might have anticipated

Featured in the Brit List in 2018, All My Friends revels in the comedy of embarrassment; the awkward silence, the cringing humiliations and those unguarded, ill-chosen remarks about someone who is inevitably standing right behind you. The hapless victim of much of this is decent, mild-mannered Pete, sympathetically played by the film’s co-writer Tom Stourton. Pete is heading to the heart of the English countryside for a 31st birthday blowout with “the old gang” from university. The mood is jolly but ominous. The fact that he is driving there, singing along to The Doobie Brothers’ ’What A Fool Believes’, should be taken as a clue.

Pete eventually arrives at a country pile that would not seem out of place in Downton Abbey. The film’s sole location of Sudbury Manor has the look of a plush, old-school gentleman’s club. Hours slowly pass before his four old friends finally show up. He wants to talk about his recent work with refugees and his girlfriend Sonia (Charly Clive) who will join them later. Old flame Claire (Antonia Clarke), George (Joshua McGuire), his wife Fig (Georgina Campbell) and “horrible toff” Archie (Graham Dickson) just want to party like it was 10 years ago and slide back into the bantering, teasing relationships of yore. Pete also finds himself constantly upstaged by mysterious newcomer Harry (Dustin Demri-Burns), who is full of the mischief and comic yarns they all once cherished in Pete.

All My Friends slightly strays into P.G. Wodehouse territory as Pete is surrounded by boorish silly asses. You wonder what they ever had in common and why they are going to so much trouble to reconnect and celebrate his birthday. They have scarcely seen each other for the past eight or nine years. Stopping to ponder such questions tends to break the film’s spell.

We are, of course, seeing the other characters through Pete’s eyes. His growing sense of paranoia is fuelled by every barbed comment made in jest, his ability to jump to the wrong conclusion and by his suspicions of Harry. Inevitably, and surprisingly given the size of the house, the two men are obliged to share a room on the first night.

There is tension over whether Pete is overreacting or whether something more sinister is afoot. All My Friends explores interesting issues around the durability of old friendships, the class divide and social anxiety, which gives it extra resonance in the time of a pandemic. Unfortunately, the comic set pieces around a grouse shoot and a surprise roasting by a “fake Pete” don’t provide the big laughs that might help sell the film, and the material can feel a little laboured and sour-tasting.

Ultimately, we do gain a fresh perspective on exactly what Pete has been experiencing. There is a convincing logic to the film, but it is still not quite the wild weekend the viewer might have anticipated.