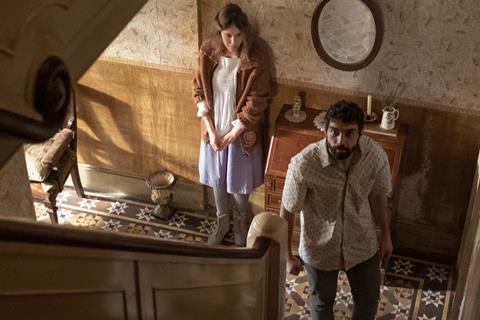 What a shocker. Actor/director Romola Garai weaves an almost absurdly delicious feminist revenge fantasy into the genre teaser Amulet, claiming the mother-in-the-attic (literally, ‘elevated genre’) premise and striking back hard with it. Wholly, gruesomely enjoyable, this bangs a further gong for a new wave of lower-budget British fem-horror, one which perhaps started with Alice Lowe’s Prevenge back in 2016 but which owes a deep debt to giallo and Peter Strickland’s recent iterations of that aesthetic. Amulet is deeply, deliberately mysterious, and all the more fun for it; the less viewers know going in, the more ferocious the ride.

Although it’s impossible to pinpoint why without giving too much away, audiences for Amulet will skew decidedly female while savvy genre fans always provide a welcoming audience for any film which skews the knife in a few tired old tropes. Premiering in Sundance’s high-profile Midnight selection, this will be catnip to festival programmers looking to showcase female directing talent in a way that makes it clear just how angry that talent can get when crossed. Sold internationally by AMP, this bears haunting similarities to The Babadook in its feminist perspective, but is much more of a construct that requires audience buy-in for a twist which will gleefully pay back in a final all-out assault.

Two story-telling strands spin out and knit back together during the course of an efficient 99-minute film which holds its cards close to its chest. And the fact that Amulet starts out in a dripping wet forest, where a lonely soldier, Tomaz (Gods Own Country’s Alec Secaraenu) mans a desolate outpost by himself (reading, teasingly, ‘On Violence’ by Hannah Arendt) sets it up as a classic creature feature. In this setting, a woman runs hysterically into the frame, seeking help, and a terrified Tomaz points his gun at her.

In London, and during another timeframe when Tomaz dreams about this past, he lives in a doss house for migrants and works as a casual labourer on a building site. He tapes his hands together when he sleeps, a damaged refugee from a forgotten war, a victim of Britain’s everyday racism, until these subterranean lodgings burn down and he encounters a sympathetic nun in Sister Claire (Imelda Staunton).

The appearance of Staunton is the film’s first real “show”; things always get more interesting when this actress comes to play. Sister Claire finds him lodgings in a strange old house, where the beautiful Magda (Carla Juri) cooks amazing meals and tends to her violent, haggard mother who is locked in the attic. This isn’t a good place, as evidenced when a bloody, hairless, bat washes up the toilet bowl one night. Yet Tomaz is drawn inextricably to Magda, despite all the omens.

As the stands of Tomaz’s stories tighten around him, Garai has a bloody good time with a protracted denouement, culminating in a SFX sequence to delight Dario Argento himself, whose spirit breathes through her feature. Having made the short Scrubber, which also dealt with motherhood (of sorts), Garai goes all-out for her first feature, with daring cuts, a few retro flourishes and some suitably alarming sound design (Nick Baldock’s heightened noises working very well with Sarah Angliss’s probing score).

But what is so flat-out fun about this film is the sly rage which propels it: alongside the knowledge that she’s using sexist tropes to set us up for the fall. The Babadook and Prevenge may have warned viewers what is coming, but Garai is here to call #timesup, and it’s a pretty bloodcurdling wail.