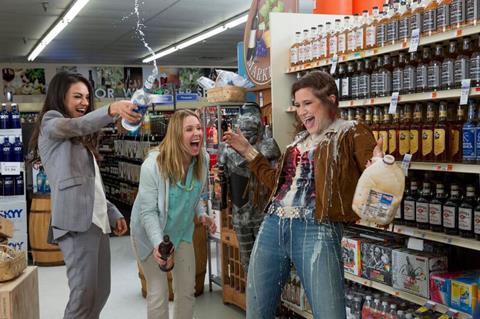 A rowdy salute to the thankless sacrifices made by modern mothers, Bad Moms has lots of spirit, some funny moments and wonderful chemistry from its three leads. And yet, this so-so comedy can’t shake a formulaic, uninspired construction that often settles for the easy joke or the pat pay-off. As the moms who decide to loosen up and ditch society’s judgments about how they should behave, Mila Kunis, Kristen Bell and Kathryn Hahn make for lively company, but they’re friskier and funnier than the movie that contains them.

Opening across North America on July 29, this R-rated STX Entertainment release could prove decent counter-programming to Jason Bourne and Suicide Squad, the film’s advertising hoping to draw comparisons to other female-driven comedies such as Bridesmaids. Kunis and Bell have some star power, resulting in solid theatrical grosses domestically, but international markets may prove far tougher.

Kunis plays Amy, a stereotypically harried working mom of two who must juggle a demanding job, her kids’ activities and an immature husband who doesn’t help out around the house. (Even worse, he’s been having an affair online for ten months.) Tired of the snooty superiority of fellow mother Gwendolyn (Christina Applegate), who’s the PTA president and devotes her entire life to her children, Amy bonds with pushover Kiki (Bell) and boozing, slutty Carla (Hahn) to form a group of women who decide to be “bad moms”, no longer killing themselves to achieve some sort of perfection as mothers and, instead, forcing their kids to start taking more care of themselves.

Written and directed by Jon Lucas and Scott Moore, who wrote The Hangover and The Change-Up, Bad Moms shares with their previous films a frank irreverence in which the niceties of polite society are exploded by fed-up, deeply flawed characters. But while the title may suggest this comedy is akin to movies like Bad Santa or Bad Teacher, which were about truly horrible people, Bad Moms flips that approach slightly by focusing on three good-hearted women who choose to stop worrying about being so responsible.

Even then, though, these characters are types — Amy, the self-critical workaholic; Kiki, the sheltered goody-goody; Carla, the blasé hedonist — so nothing particularly surprising happens after they make the switch. What helps, however, is the actresses’ goofy rapport, which makes them fun to be around even when the jokes misfire or the sequences become too broad, such as when the characters discuss how to handle a man with an uncircumcised penis.

Kunis brings real feeling to the overextended Amy, giving us the sense of a woman trying to keep her head above water, her honourable intentions constantly undermined by the fact that she’s spread so thin. Bell’s sweetly innocent Kiki and Hahn’s irascible Carla are agreeably mismatched friends, Hahn incorporating a nice slow-burn exasperation whenever Kiki says something else ridiculously naïve.

But despite making some salient points about the way women are judged in our society on their effectiveness as mothers — and the ways that women measure themselves against other mothers — the film-makers can’t quite figure out how to craft a cohesive story out of these observations. After having Amy and her new friends stop being so selfless for their kids, Lucas and Moore introduce a love story for Amy (in the form of a hunky widower played by an appealing Jay Hernandez), some needless plot busyness and, finally, a showdown between Amy and Gwendolyn as they both run for PTA president. There are fun bits scattered throughout Bad Moms, but they tend to be a bit isolated and, in certain cases, feel like they may have been improvised on the set.

Along the way, a supporting cast that includes Applegate and Jada Pinkett Smith are largely wasted, the actresses playing one-note villains who aren’t even enjoyable in their ice-cold bitchiness. But give Bad Moms credit for coming up with a really funny 12 Years A Slave gag.