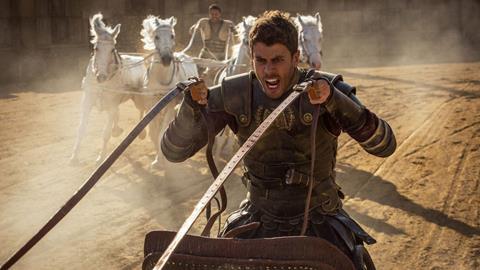 An epic tale of revenge and forgiveness with a junk-food centre, Timur Bekmambetov’s Ben-Hur remake offers robust spectacle and some decent performances. But ultimately, the director of Wanted and Abraham Lincoln: Vampire Hunter is, perhaps unsurprisingly, not the ideal filmmaker to capture this timeless story’s more nuanced emotional range, resulting in a movie whose good intentions are trampled by rampant earnestness and the project’s overall superflousness.

Bekmambetov’s films are always best at their most outlandish, and his reimagining of the high-seas battle and the chariot race are imaginative and propulsive

Hitting North America on August 19, this Paramount release lacks star power outside of Morgan Freeman’s presence in a supporting role, but no doubt the studio hopes that audience familiarity with the 1959 Charlton Heston film — the most famous of the big-screen Ben-Hurs — will help boost grosses. Still, expect only a so-so theatrical performance, even if Christian groups come out to support the action-drama because of its religious underpinnings.

Jack Huston plays Judah Ben-Hur, a Jewish prince living in Jerusalem at the time of Jesus (Rodrigo Santoro). Messala (Toby Kebbell), Judah’s best friend and adopted brother, joins the Roman army to make a name for himself, becoming an officer who wants to recruit Judah to help rid the empire of zealots. But Judah feels the empire is too oppressive and refuses Messala’s request, setting in motion his arrest for treason and eventual imprisonment in a ship’s galley.

The 1959 Ben-Hur — which won 11 Academy Awards, including Best Actor for Heston as Judah — is the cinematic version of this story that Bekmambetov’s film most closely resembles. Stripping the narrative down from three-and-a-half hours to just over two, this new Ben-Hur preserves the previous film’s two most memorable set pieces — the deadly ocean battle and the climactic chariot race between Judah and Messala — and the overall revenge narrative while jettisoning the ponderous speechifying and stately pacing.

Consequently, this remake has a muscular fleetness, and the script by Keith Clarke (The Way Back) and John Ridley (an Oscar-winner for 12 Years A Slave) does try to play up the psychological depth of its writers’ previous screenplays. Like those films, Ben-Hur digs into the dehumanisation that occurs when a person struggles to stay alive amidst harsh conditions. And Huston, rejecting Heston’s granite-like moral righteousness, imbues Judah with a soulfulness that makes his plight compelling without turning the character into a larger-than-life hero.

Huston’s rapport with Kebbell is nearly the film’s saving grace as we see how these two brothers become enemies, a development that wounds them both. Although he plays Ben-Hur’s villain, Kebbell (terrific as the conniving ape Koba in Dawn Of The Planet Of The Apes) gives the man pathos and shading so that we see how Messala’s allegiance to the empire is, in part, a desire to feel like he belongs somewhere. When the two men square off in the final race, their battle is a continuation of a childhood tension in which Messala felt like an outsider in Judah’s family because he was adopted.

Bekmambetov’s films are always best at their most outlandish, and his reimagining of the high-seas battle and the chariot race are imaginative and propulsive. Unfortunately, he’s not getting any better as a dramatist, and although he has cast Ben-Hur well — Freeman is reliably noble as a sheik who takes Judah under his wing — the movie never feels as confident during its dialogue scenes, when characters debate their different positions woodenly.

Of course, no Ben-Hur is complete without the inclusion of Jesus, and Santoro portrays him without fanfare, emphasising his gentleness. To be fair, the movie does a passable job hitting the big emotional beats as this prophet’s traumatic, selfless death prompts Judah to let go of his hatred for Messala. But as is the case with the film in general, the climax is bluntly competent without being especially moving or inspired. This Ben-Hur is a tale of the Christ noticeably devoid of miracles.