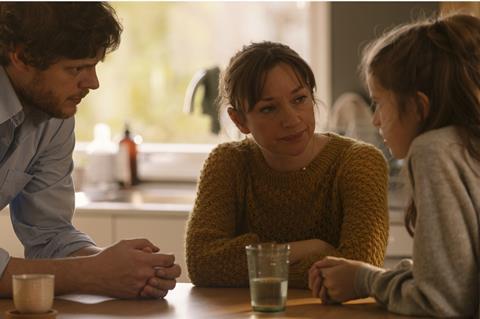 The title of Dag Johan Haugerud’s second full-length feature may refer to children but it’s the adults that the writer/director has in his sights in his sprawling sociopolitical drama set in the wake of a tragic school accident. Thanks to its strong ensemble cast, the film is never less than engaging although there’s a bookish feel to proceedings that suggests Haugerud’s focus is as much on teaching his audience something as it is on entertaining - you almost expect an ethics class after the end credits.

Everyone is almost always trying to do the right thing, even when the result doesn’t go as intended

Premiering at Venice Days in advance of an autumn release at home this autumn, Beware Of Children is Haugerud’s follow-up to 2012’s award-winning I Belong. Internationally, its emphasis on talk and an extended running time may best suit streaming platforms.

Haugerud sets up his moral maze on a high school playing field in the opening sequence, immediately after 12-year-old Lykke (Ella Øverbye, making a naturalistic debut) has lashed out at classmate Jamie with deadly consequences. In an early indication of the shifting perception of the youngster according to each adult’s viewpoint, Lykke is also known to various people as Natalie or Anna - as a friend of her grandmother puts it, when it comes to the incident, “Everyone will have their own version”.

Lykke herself is initially conspicuous by her absence as the action instead zeroes in on the adults in her orbit. Among them are headmistress Liv (Henriette Steenstrup), Liv’s gay brother and fellow teacher Anders (Jan Gunnar Røise) - who taught both Lykke and Jamie - and Jamie’s widowed right-wing politician father Per Erik Lundemo (Thorbjørn Harr). On the home front is Lykke’s Labour MP dad Sigurd (Hans Olav Brenner) and left-wing journalist mum Eva (Andrea Bræin Hovig).

Although the contrasting politics of the parents might sound like the set-up for a powder keg of tension, Haugerud downplays the dramatics. The beliefs involved may influence the preconceptions the characters have of one another but the director is more interested in the way things play out in practice. The film is produced by Motlys, which has worked extensively with Joachim Trier in the past, and Haugerud’s film displays a similar ambiguity and intellectual rigour to his countryman’s work. The heavily scripted scenes here explore the manner in which personal secrets or hidden feelings of guilt have much more influence on people’s reactions and communication than wider politics. The approach is also empathetic, in that everyone is almost always trying to do the right thing even when the result doesn’t go as intended.

This emphasis on talk does lead to a certain staginess, an effect that Haugerud and his cinematographer Øystein Mamen attempt to mitigate by the use of reaction shots to shift the focus - not always easy for an actor to sell - or by having two characters continue a conversation while we watch a third who is not involved. The spare scoring by Arnaud Fleurent-Didier and Peder Kjellsby also injects drama - especially a repeated, eerie falling Shepard-Risset glissando that recalls a plane dive - but they could use more help from the action and script.

There’s a suspicion that the writer/director is determined to explore every avenue of debate by bringing in additional characters, including Anders’ boyfriend Jan (Brynjar Åbel Bandlien), irrespective of whether it adds to the experience. However, the lengthy exchanges do allow him to consider the way that people fall back on rhythms in conversation, so that Anders repeatedly answers questions with the phrase, “Yes… or no” - indicating his own feelings of culpability - while his colleague, in a bid to cushion whatever she has to say, constantly begins her sentences with, “I must admit that…”. Haugerud’s focus on the adult world also shows how easily the children’s emotions can get lost in the shuffle. The irony is that Haugerud comes close to losing sight of these himself.