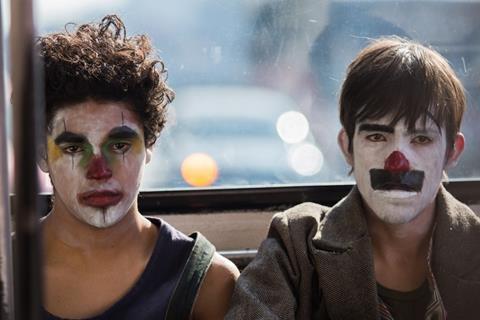 At the turn of this century, Gael García Bernal charismatically incarnated the fresh new spirit in Mexican cinema as the star of Amores Perros and Y Tu Mamá Tambien. Now he hands the baton over to new talent in Chicuarotes, a convincing enough achievement as far as the acting goes. Otherwise, however, the film disappoints as a belated follow-up to García Bernal’s first directing feature Deficit (2007). While that film was a coolly ironic depiction of Mexico’s spoiled middle-class youth, Chicuarotes returns, more or less, to Amores Perros territory in the story of two young working-class chancers desperate to improve their lot – and screwing up in every way.

It’s the tonal discontinuity that really scuppers the film

‘Chicuarotes’ are the inhabitants of San Gregorio Atlapulco, a neighbourhood of Mexico City (according to Wikipedia, it literally means hot peppers, or ‘stubborn or nasty’). In particular, the word refers to Cagalera (up-and-coming actor Benny Emmanuel) and Moloteco (Gabriel Carbajal), two youths first seen ineptly busking as clowns on a city bus – then pulling a gun when the passengers aren’t forthcoming with their pesos.

Back in their shanty community, Cagalera, the more confident mastermind of the duo, lives with his mother, sister and put-upon gay brother, all under the boozy eye of volatile paterfamilias Baturro (Enoc Leaño). Desperate to get out of town and make a new life – preferably with his hairdresser girlfriend Sugehili (Leidi Gutierrez) – Cagalera enlists himself and Moloteco for wide-boy Planchado’s misbegotten raid on his girlfriend’s lingerie shop, a jape that ends comically when the thieves are intercepted by two large, flirtatious female cops.

Things take a markedly less droll turn when the desperate duo kidnap the young son of the local butcher and scowling authority figure, hoping for a handsome payoff – but the butcher is close to much-feared hood Chillamil, newly out of prison (a glowering but not terribly threatening turn by Daniel Gímenez Cacho, recently the star of Lucrecia Martel’s Zama). There’s a nicely done moment of farce in Cagalero’s cack-handed attempt to place a ransom note in the butcher’s shop, but the kidnap episode increasingly leaves a sour taste in the mouth – especially when it seems to point to a lynch mob hunting down innocent suspects; and it all culminates in an uncomfortable and incongruous attempted rape. Meanwhile, the subplot featuring the abusive Baturro gets more overbaked and clichéd as it goes on, its excess exacerbated by the far too obvious emotional commentary of the film’s score.

There are moments that work – not least the opening bus scene and the boys’ getaway to a Spanish-language cover of ‘I Fought the Law’. And there’s definite energy and wit in the interplay between leads Emmanuel and Carbajal. But it’s the tonal discontinuity that really scuppers the film, along with a script by Augusto Mendoza (Diego Luna’s Mr Pig and Abel) that rarely wanders too far from familiar hard-times tropes.