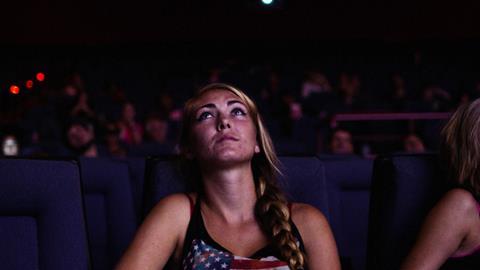 Dark Night is a drama of grim inevitability. Tim Sutton’s meditative tour of the day before a deadly attack on a cinema by a man with a rifle shows a country disconnected at its core. No subject could be more immediate and unnerving for US audiences. Dark Night, citing the 2012 killings at a multiplex in Aurora, Colorado during a screening of Dark Knight, is as topical as Chi-Raq, with a rare directorial assurance, given the unruly chaos of its subject.

Sutton shows us that private misery is endured in solitude, and guns enable angry unhappy folk to share those feelings – again and again.

Critics in the US will praise Sutton’s film, which could find its American audience more on VOD than in the multiplexes where Dark Night lurches toward its crescendo.  Ongoing debates over gun control could boost its US numbers. European audiences will be drawn to its chillingly understated view of a fact of American life.

There’s not much of a plot in Dark Night, where the end is (mostly) known and observation is the narrative originality. Sutton (2013’s Memphis) finds a place to put the camera, and keeps looking throughout a hot summer day.

A disaffected teenager with an angry frown talks to the camera head-on with his mother. Another young man walks a restive pit-bull, and then paces off a path in a huge parking lot.  A young girl takes selfies of herself while getting dressed, and undressed. Military vets – one of them in a t-shirt  that reads “I will never accept defeat” – air their frustrations about being back home, a place that’s more complicated than combat. One teenager dyes his hair orange – get the reference?

In between those extended observations, Sutton and his gifted DP Helene Louvart (Pina) survey the landscape from above or point the camera upward at streetlights in groups of three that conjure up the Dark Knight logo. It is suburban America – Dark Night was filmed in Sarasota, Florida – and it’s no less American, and far more timely, than a human landscape from Norman Rockwell or one from Frank Capra. Except here there’s no harmony.

There’s certainly no place for harmony in the music of the Canadian singer Maica Armata, the solitary voice of dull-edged anguish, which feels like a voice-over for the atmosphere that Sutton has created. Armata’s singing, languid and vulnerable, doesn’t explain anything; it wails like Cassandra or Jeremiah. These are moans of warning that you can associate with any of the uneasy characters which Sutton’s camera follows.

And therein lies the Americana in Dark Night. Eventually someone heads into the multiplex with a gun, but everyone is on the edge. You’re left at the end of the film with the horror that a lone killer ended the lives of people who came out to watch a Batman movie. You also have the ominous sense that any of the lone souls in this suburb could have lashed out. Every man can be a James Holmes, the killer of Aurora, Colorado – or be his victim.

Elephant (2003) by Gus Van Sant, clearly a factor in Sutton’s numbing style and in his storytelling by means of long takes, grabbed the dilemma by the other end. It probed and reflected on how boys of relative privilege could get to that point. For Sutton, we’re all there. Every house has an elephant in the living room. Bear in mind that Florida, where Sutton filmed, is at or near the top of the US in bankruptcies and home foreclosures. Florida also has a “Take Your Gun to Work” law.

No one in Sutton’s cast is recognisable, at least not yet, although newcomer Robert Jumper as a loner with multiple scores to settle has a repressed intensity that could bring calls to his agent, if he has one. And the cast’s anonymity may be part of Sutton’s storytelling gambit. As the Nixonian term “silent majority” is now exhumed in the US presidential campaign by Donald Trump, these are the faces that we don’t notice until someone ends up dead after a crime or is led into court in handcuffs.

In a film that suggests so much about what leads to violence, Dark Night has no megaphone for gun control, although the disturbing sounds of rifles being cocked and loaded are heard again and again. Sutton shows us that private misery is endured in solitude, and guns enable angry unhappy folk to share those feelings – again and again.