'England Is Mine': Edinburgh Review 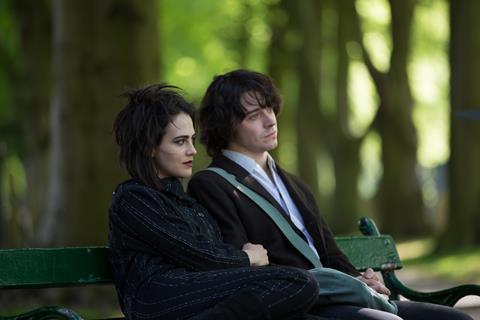 In the years before he became ‘the pope of mope’ and, as the frontman and lyricist for The Smiths, one of the most influential recording artists of his generation, Steven Morrissey (Jack Lowden) was a depressed, painfully introverted working class Manchester lad. The music which would become the soundtrack to teenaged angst of the 1980s is notably absent in this unauthorised portrait of Morrissey’s early life and, without the melodies to back it up, some of his trademark waspish wit can come across as self-absorbed petulance. Of all the periods in the life of Steven Morrissey on which to focus, the one in which he spent six weeks in bed, crippled by self doubt and misery, is perhaps not the most dramatically compelling. Still, the first feature from Mark Gill, whose short, The Voorman Problem, was Oscar-nominated, is a suitably abrasive study of one of British pop’s spikiest characters.

This ultimately feels like a taster; a prelude to the main story

The main audience for this film – fans of Morrissey and The Smiths – are also likely to be the same people who will feel the absence of his music most keenly. As such, the positive word of mouth required to connect the picture to a broader market might not be assured. However, the undercurrent of acerbic humour should go some way towards making up for the lack of hit songs and England Is Mine could enjoy exposure on the festival circuit, being of particular interest to events focused on music.

Without the characteristic lilting guitars and melancholic warble of Morrissey’s vocals, the film instead leans on the music that inspired and shaped the gauche young man into the artist he became. The perky harmonies of Motown girl groups and the cheekie chappie smut of George Formby provide a playful counterpoint to the dour bloke-rock of the pre-punk Manchester music scene. Even at the seminal Sex Pistols gig at Manchester’s Free Trade Hall, we get that sense that the young Morrissey is slightly removed, his experience filtered through cultural references which have been dismissed as irredeemably uncool by most of his contemporaries.

Withdrawn, bitingly judgemental and socially awkward, the young Morrissey is a tricky role to inhabit. Jack Lowden manages to convey some of the aching vulnerability and sadness which manifests itself as a rather unappealing tendency to assume a position of jaded superiority, as he drops disdainful bon mots on bemused work colleagues.

Female characters are of key importance to the story, most notably Linder Sterling (Downton Abbey’s Jessica Brown Findlay). An artist and figure on the punk and post punk scene, Sterling was a catalyst in Morrissey’s creative awakening. Thanks to Brown Findlay’s warm performance, Linder is a charismatic presence in the film; through her eyes we get to see beneath the intellectual armour that Morrissey has built around himself. However, a scene which acknowledges the role of Morrissey’s mother (Simone Kirby) in the development of his voice feels a little tokenistic.

The cinematography occasionally finds a stark beauty in the industrial north of England, but has to contend with a colour palette which goes heavy on murky tones of tobacco, spilt lager and quiet desperation.

There are parallels here with Anton Corbijn’s biopic of Ian Curtis, Control. But without the crucial performance element – we only see Morrissey on stage once – this ultimately feels like a taster; a prelude to the main story.