An intense, stylised rendition of a Holocaust-themed stage play by Kata Weber and Kornel Mundruczo 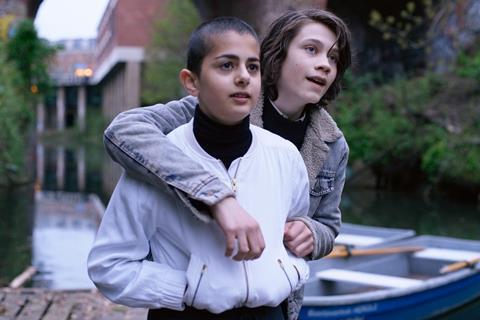 After Pieces of a Woman, pieces of a historical trauma. Following their attention-grabbing US-set drama shown in Venice last autumn, the Hungarian team of writer Kata Weber and director Kornel Mundruczo return with a Holocaust-themed triptych of linked episodes, unified by complex long-take execution. Emotionally intense and visually arresting, Evolution is rewarding viewing for those willing to enter its austere territory, but the technical virtuosity leaves it on the edge being perceived as of something of an academic exercise. It’s a film easier to admire rather than whole-heartedly engage with, making it a daunting prospect for distribution - even given the Mundruczo-Weber team’s rising prestige post-Pieces.

Authentically risk-taking, with performances that underwrite its integrity and sense of purpose.

The film is based on a play written by Weber and directed on stage by Mundruczo in 2019 for their Budapest-based company Proton Theatre - with two leads, Annamaria Lang and the veteran Lili Monori, returning in the central section. The three chapters are each named after a character.

The first, ‘Eva’, begins in a darkened cell of a room, as three men step in with buckets and brushes and start frantically trying to scrub the place clean. Visual clues soon tell us where we are – in one of the gas chambers of World War Two. A remarkable feat of stagecraft unfurls a resonantly horrific image: the men start unpicking human hair from the crevices of the chamber, first single strands, then bigger ones, then seemingly endless ropes of human residue. A surprise discovery then leads us into the daylight, in one of three extravagant simulations of seamless single takes, contrived by Mundruczo and star DoP Yorick Le Saux (a collaborator with Guadagnino, Assayas, Denis et al).

A similar surprise ending, in altogether apocalyptic vein – and a tour de force for designer Judit Varga - caps the second section, ‘Lena’. But most of it is a conversation piece, set in the Budapest apartment of elderly Eva (Monori), a Holocaust survivor visited by her daughter Lena (Lang). Lena, who now lives in Berlin with her son Jonas, has come home to gather evidence of her Jewish origins for bureaucratic purposes – and to challenge her mother about the way that the shadow of the Holocaust dominated her childhood. Both actresses push themselves to a performative limit, but Monori is especially commanding, evoking the physical and mental fragility of a woman brutalised from the very start of her life, yet retaining a steely will and an utterly lucid awareness of herself, the world and the weight of history.

The third section, in a lighter mode, jumps to Berlin, where teenage Jonas (an impressive Goya Rego) is sent home from school when a fire breaks out. The incident, it emerges - despite the teachers’ nervous equivocations - was caused by an act of anti-Semitism, something that cannot be reassuringly dismissed as part of Europe’s past. Later, Jonas is seen joining a school parade for Germany’s St Martin’s Day. But he feels none too involved in this Christian tradition, and neither does Yasmin (Padmé Hamdemir), a young Turkish girl Jonas has previously sparked with. The film ends on an upbeat, emotionally gratifying note, as it suggests that youth - and empathetic alliances between different races and cultures – might help free Europe from the poison of its past.

The fluidity of the long takes – here taking in surprise transitions into aerial shots, and ‘impossible’ moves outside apartment windows - runs the calculated risk of distracting us from the drama. In the wake of Birdman and Victoria, such camera choreography, in the interests of dazzlement or excitement, has become a trademark indulgence for directors. But it’s also worth remembering that it has also been used for serious and challenging purposes, notably in Chinese drama An Elephant Sitting Still and the Auschwitz-set Son of Saul. Mundruczo doesn’t quite attain the adamantine concentration of either of those films, but overall, Evolution comes across as authentically risk-taking, with performances that underwrite its integrity and sense of purpose. The absolute dramatic meat of the film is in the central two-hander, with Monori and Lang recapturing the full force of live performance.