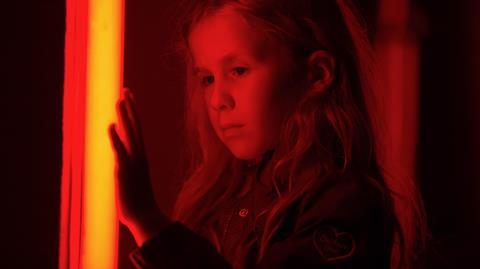 Paid-for sex may be heavenly in the titular establishment of Flemish Heaven (Le Ciel Flamand), but its emotional ramifications are altogether hellish in this second feature by Belgian writer-director Peter Monsaert. Following his 2012 debut Offline, former theatre and video art practitioner Monsaert turns in an atmospheric, elegantly stylised piece of emotional realism about family dynamics in and around a brothel.

Monsaert pulls this off with elegance and panache

Strong performances, intelligent scripting and discomforting sexual thematics help override elements of over-statement and contrivance, and make this an approachable, just-off-the-mainstream film that will be a solid draw for festivals, and modestly marketable item for niche distribution.

The title sparks a degree of visual punning. Gaudily lit roadside brothel Le Ciel Flamand (‘Flemish Heaven’) adds colour to the drab rural landscapes of the border between France and Flanders; but the phrase also means ‘Flemish sky’, and there are plenty of those, looming greyly, in the widescreen landscape shots that are a leitmotif of David Williamson’s cinematography, as potent in tight shallow-focus interior shots as outside.

The brothel is a family concern, run by single mother Sylvie (stage actress Sara Vertongen) and her mother Monique (Ingrid de Vos), whose late husband started the concern years ago. There’s a lot of back story implied, some of it barely imaginable – like the question, clearly still eating Sylvie, of how her parents got her into the game.

Sylvie’s young daughter, Eline (Esra Vandenbussche), on the verge of her sixth birthday, doesn’t know exactly what Mummy and Grandma do for a living; never allowed on the premises, she only knows that it involves giving men hugs. But things change for her, first when she sees an elderly punter carried off dead after a hugging session, and second, when she’s abducted by a paedophile visitor to the brothel.

This incident turns the family’s lives inside out - and makes Sylvie question her and Eline’s relationship with Dirk (Wim Willaert, from Offline), a middle-aged bus driver who is officially Eline’s ‘uncle’, but who is signaled from the start as her biological father, following Sylvie’s professional liaison with him.

Filmed partly in a real-life brothel – which has now actually changed its name to ‘Flemish Heaven’ – the film offers a downbeat and deglamorising evocation of a female-run, no-frills establishment. Eschewing the dark-side-of-the-street mystification that often hovers over such places in European art cinema, Sylvie’s joint is presented simply as a tightly-run working concern involving accounts and work rosters, and where the aura of eroticism is carefully constructed with the use of watered-down bubbly and a bit of red-hued lighting. We also get a strong sense of Sylvie’s low-tolerance approach to difficult customers, like a self-satisfied bore with a virulently racist sense of humour.

The emotional core of the film is Eline, whose mixture of blithe ignorance and intense curiosity makes for a troubling moral theme: a key question here is how sex workers can earn an honest living while protecting their children from the dangers that surround the profession. This in itself might have been sufficient material for Monsaert to explore, along with the dramatically rich question of Sylvie’s relationship with her child’s officially non-existent, yet deeply devoted father. It therefore feels surplus to requirements, and somewhat contrived, to add the element of Eline’s abduction, opening up a thriller strand in which both Sylvie and Dirk try to identify the guilty man, Sylvie with the aid of the brothel’s new webcam system.

The investigation theme, though adeptly handled, feels like a distraction from what could have been a more concentrated,documentary-toned drama about a very particular milieu.

Yet that wouldn’t have been the film that Monsaert pulls off with elegance and panache. The performances are excellent, with Vertongen bringing a matter-of-fact toughness and intelligence to the role of a woman keeping her life together with dignity and control, and aware of the price. Wim Willaert gives Dirk a touching, taciturn vulnerability, and the unsettlingly serious-faced young Essra Vandenbussche is affecting as the innocent who’s learning a little more every day about the strangeness of the adult world. In a film that’s deeply Belgian – not least in its use of some very local Christmas traditions – character stalwart Serge Larivière puts in a show-stopping, if slightly over-the-top cameo as a very seedy Santa.