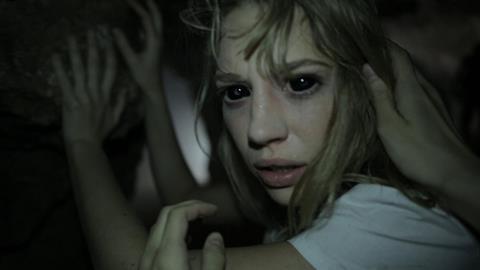 Given the wealth of Jewish lore and legend, and its use in various versions of the golem and dybbuk legends, it’s a surprise that it’s taken so long for a demonic horror movie to come out of Jerusalem, sacred to and contested by three major religions. Even with the proliferation of found footage films in which characters get lost in haunted tunnels, JeruZalem is unusual enough to command international attention.

This offers a satisfyingly large-scale demonic incursion as glimpsed from the streets.

While the Israeli film industry has recently turned out several horrors – Aharon Keshales and Navot Pupushado’s Big Bad Wolves and Eitan Gafny’s zombie movie Cannon Fodder – JeruZalem, scripted and directed by brothers Doron and Yoav Paz is the country’s first supernatural effort. It’s also a next-generation version of the found footage horror film, one-upping the tonally-similar Cloverfield by having a protagonist wear a high-tech Google Glass device rather than tote a HUD camera through an apocalyptic crisis.

The film opens with a snippet of a filmed exorcism, purportedly from a Vatican archive.  This is rougher and more dramatic than most imitations of The Exorcist (itself partly an imitation of The Dybbuk) as the subject sprouts ragged demon-wings and is summarily executed by a priest with a single shot to the head.

This casts an uneasy shadow over the slower build-up sequences that follow, but deftly creates a distinctive take on possession mythology. Jewish American Princess Sarah (Danielle Jadelyn), still troubled by her brother’s death, is given a Google Glass by her devoted father on the eve of a trip she is taking to Tel Aviv with her more outgoing blonde friend Rachel (Yael Grobglas, who was in Rabies). On the plane to Israel, they meet Kevin (Yon Tumarkin), a handsome archaeologist who persuades them to come with him to the old city of Jerusalem, where they hook up with friendly local Omar (Tom Graziani) and set out to party hard and visit ancient sites.

When Sarah’s bag is stolen, she loses her prescription glasses and has to wear her gadget all the time, sidestepping the why-keep-filming issue that dogs found footage movies.

Ominous notes creep into the holidaymaking, as Omar explains that a house they pass is an asylum for those suffering ‘Jerusalem Syndrome’, a species of madness brought on by being in the centre of vortex of religious conflict.  The rational-seeming Kevin, with whom Sarah has become involved, becomes a ranting maniac when overcome by premonitions of doom and is dragged off to the madhouse by Israeli soldiers.  Then, demonic events on a Biblical scale overtake the city and Sarah finds herself in the middle of escalating confusion and terror, trying to rescue Kevin, keep her infected-by-a-demon friend safe and escape ground zero through a labyrinth of tunnels.

Aspects of the Glass established early on as amusements – like the face-recognition software, a zombie-killing game and the music library – are deployed in more sinister context and there’s a stunning final shot that conveys just how much the apocalyptic catastrophe has changed the city and the protagonist.

Jadelyn is the lead character, but necessarily offscreen almost throughout the film, which puts the acting weight on Grobglas and Tumarkin, who manage to go from fun-loving young folks to haunted, desperate and perhaps possessed.  By filming on the fly, the Paz brothers gained access to many locations throughout the city – and the ever-heightened tensions between the various factions on the streets and in the shrines of Old Jerusalem add to the unsettling horror film feel.  It has humour, often at the expense of its clueless Americans, but goes all-out for the monstrous in its fast-paced, hectic latter stages. A few sub-plots get lost, with the dead brother strand surprisingly not paid off, but this offers a satisfyingly large-scale demonic incursion as glimpsed from the streets.