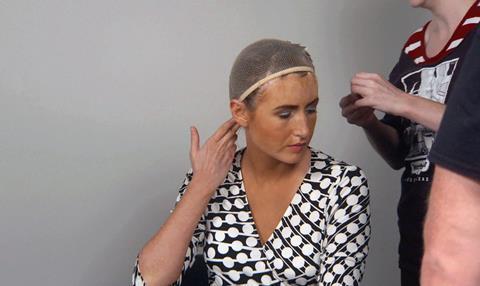 In Kate Plays Christine, the indie actress Kate Lyn Sheil mostly plays herself discovering a tormented character: Christine Chubbuck, the real TV newscaster who committed suicide during a live broadcast from her ABC affiliate station in Sarasota, Florida, in 1974. Robert Greene’s latest fusion of reality and meta-fiction is fiercely intelligent, but inescapably tars itself with the ghoulishness it critiques.

Sheil’s brittle, sardonic Chubbuck deliberately conforms to the sexist stereotype of a romantically and professionally frustrated career woman who lashes out at others and herself.

This is likely to prove a controversial entry in the U.S. Documentary Competition of the current Sundance festival - where Antonio Campos’s dramatic feature Christine, starring Rebecca Hall as the TV anchor, is also playing. Beyond Sundance and other festival runs, however, Kate Plays Christine will struggle to impose its deconstruction of Chubbuck’s death on audiences put off by the film’s surface morbidity. For Sheil, though, it should amount to a breakthrough.

The film proceeds as a cinema vérité-style research trip. Sheil introduces herself as a New York actress with misgivings about her vocation and travels to Florida to investigate Chubbuck’s little-known history. Meticulously preparing to play her in a faux movie, she buys a dark brown wig from a veteran woman wigmaker, who speaks with unusual compassion about Chubbuck, rarely discussed by Sarasotans these days.

Appalled by her first attempt to capture Chubbuck, Sheil gradually assumes her severe look and edgy character. She muses on the ordeal of making the film while moping around Sarasota. She talks not only to people who knew Chubbuck and an unenlightening clinical psychologist, but to the sympathetic Florida actors Greene has cast as her relatives and colleagues.

Sheil’s brittle, sardonic Chubbuck – confined to fragments of the incomplete film-within-the film that re-creates the 29-year-old journalist suffering work setbacks and romantic rejection – deliberately conforms to the sexist stereotype of a romantically and professionally frustrated career woman who lashes out at others and herself. Sheil is too empathetic, however, not to suggest how deep Chubbuck’s pain was – or why she chose such a radical form of performance art to make a statement against the proliferation of what she denounced, in her dying words, as “blood and guts television”. (Her suicide was only one influence on Paddy Chayefsky’s Network script.)

Knowing a straightforward movie about Chubbuck would trespass on her tragic life, Greene adopted a Brechtian strategy. He draws attention to the sheer awfulness of the idea by presenting flashpoints from her unravelling in the style of a sensationalistic, badly scripted melodrama. This distances viewers sufficiently to make them question why they are watching a film that might end by showing the footage of Chubbuck shooting herself (which survives on a privately owned tape), or at least a re-staging of it.

Even watching Sheil off-duty is a loaded proposition. Chubbuck favoured a tan, so Greene filmed Sheil wandering to a sunbed in a skimpy bikini and appearing briefly topless when getting a spray tan. Though Sheil says she’s anxious not to fetishise or eroticise a woman who never had sex and considered herself unlovable, the fact that the actress allowed Greene to display her body so casually in such an incongruous context suggests they want audience members to gauge their responses to gazing at her, whether it elicits discomfort, awareness of one’s prurience, or something else.

It’s not always easy to tell if Sheil is behaving spontaneously in front of the camera or performing a role: a version of herself. Like Actress (2014), Greene’s acclaimed poetic documentary about The Wire’s Brandy Burre attempting to resurrect her career, Kate Plays Christine frequently blurs the line between being and acting.

A scene in which Sheil explore Chubbuck’s empty beachfront house culminates with her walking toward a floor-to-ceiling window overlooking the sea. The moment portentously reminds the viewer that the movie has already broached the possibility that Chubbuck could have drowned herself quietly instead of rebuking society with her public suicide. Sheil’s mannered gait and the studied images of her – reminiscent of the grieving daughters looking out to sea in Woody Allen’s Interiors – indicate the scene’s unsettling artificiality.

The film’s three-part climax, which involves Sheil breaking the fourth wall to condemn media consumers who seek out obscenely violent images, and apparently to berate Greene also, is undeniably nerve-wracking. Yet its impact is lessened because it was all too clearly scripted and staged.

Greene is a potent voice in contemporary documentary, and he has made the most here of his regular cinematographer Sean Price Williams’s combining of realist and hyperrealist styles.