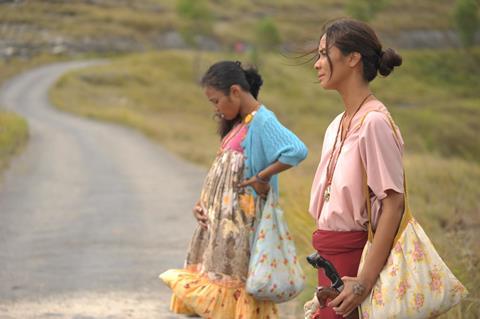 A thoroughly enjoyable, visually ravishing feminist Western played out in the widescreen vistas of rural Indonesia, Marlina The Murderer In Four Acts weaves basic elements into a tale worth telling splendidly accompanied by a sit-up-and-take-notice musical score. There’s nothing funny about rape but there is deadpan humour nonethelss in this story of a widow and how she handles the unfortunate fact that seven men have come to steal her livestock and have their way with her. Mouly Surya’s third feature is the kind of cross-culturally produced project that gives World Cinema a good name. This modest gem should travel nicely after its premiere in Directors Fortnight.

There’s delectable tension from the outset when long-haired middle-aged Markus (Egi Fedly) arrives via motorcycle at a remote cottage, knocks on the door and makes himself at home, uninvited. He’s a low-key villain, absolutely sure of his innate superiority as a male. He not only tells Marlina (Marsha Timothy) that she’ll get gang-banged this evening and like it — why, it’s practically a public service that seven men would find a widow sexually attractive, says he — but he instructs her to make dinner for him and his bandit buddies who will arrive in half an hour.

He orders chicken soup. And she prepares it, but adds an ingredient that inconveniences her guests — permanently.

Before supper, two accomplices had already left with Marlina’s cows, goats and chickens so they’re surprised when they return the next day. For one thing, Markus’s body is missing its head.

As advertised in the film’s title there are four acts, neatly heralded by chapter headings: The Robbery, The Journey, The Confession, The Birth. Those laconic phrases leave room for plenty of creative narrative options in settings where people are more likely to carry a saber than a cell phone.

On the mostly deserted road leading to the nearest town and police station, Marlina waits for a bus holding two pieces of vivid evidence relevant to the crime scene back at her place. She’s joined by talkative Novi (Dea Panendra) who is nearly 10 months pregnant and understandably peeved by her baby’s refusal to exit the womb. That’s a sore topic for Marlina.

When the truck-style bus comes, some passengers flee — they don’t care for the sight of what Marlina is carrying. But a passenger further down the road is unflustered. She’s expected at her nephew’s wedding with two horses and she’s already late.  This motley crew will make it into town, but not before the two surviving bandits make things difficult.

Any urbanite endeavouring to learn how to live in the moment will be impressed by how these characters roll with their frequently outrageous changing fortunes. Are the women strategising a long game or are the men just so chronically blinded by their own arrogance that it never crosses their minds that women have brains, too? Sometimes the camera is up close and personal and sometimes dialogue is overlaid on long shots so long one can barely make out the humans in the landscape.

The musical score by Zeke Khaseli and Yudhi Arfani is simply terrific. It’s a 21st century cousin to Ennio Morricone’s classic melodies for Sergio Leone’s so-called spaghetti Westerns, but carves out its own berth.

In a touch that deepens the theme of revenge and whether it’s ever justified, one of our heroine’s victims haunts her at surprising junctures.