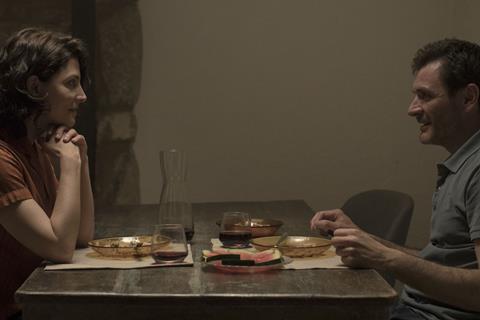 Petra (Barbara Lennie) is looking for truth, as she announces early on in the film. “You’re in the wrong place,” says Marisa (Marisa Paredes), the wife of the artist with whom Petra has an extended residency, disdain seeping from every word. Truth, or the lack of it, is the crux of this latest drama from Jaime Rosales (The Hours Of The Day). It takes the question of Petra’s paternity as a jumping off point to to explore the poisonous creeping consequences of a cruel truths and cynical lies on the lives they impact.

The picture, captured with a slowly panning camera which creeps like the spread of a bloodstain, looks terrific.

Rosales eschews the extreme naturalism, austerity and longueurs of some of his earlier work, and employs a non-linear chapter structure which, for the first hour at least, adds an intriguing knotty texture to the film. Ultimately, however, it’s a formal experiment which falters in the second half, rendering several key sequences redundant and robbing the picture of an emphatic ending.

It does, however, mark a conscious effort on the director’s part to connect with a broader audience. With this in mind, Petra should be a more commercial prospect, particularly within Spanish language territories. Strong performances, particularly from Lennie (excellent recently in the similarly-themed Sunday’s Illness), Paredes and Joan Botey as the truculently malicious artist, Jaume, will be a key selling point. Whether this will be enough to translate from festival interest to an arthouse career is less certain.

One thing is certain, however. The picture, captured with a slowly panning camera which creeps like the spread of a bloodstain, looks terrific. Hélène Louvart’s cinematography emphasises emptiness, constantly drifting away from the characters to focus on the space around them. Even when they share the screen, they are separated within a frame which is carved up by doorways and mirrors. Introduced to the family of Jaume – his wife Marisa and browbeaten adult son Lucas (Alex Brendemühl) – for the first time, Petra remarks on their lack of interaction. They are discreet entities, all following different orbits in their uneasily shared space. It is, confides Lucas, the only way to coexist with someone as difficult as his father.

A celebrated and financially successful artist, Jaume’s unpleasantness goes beyond the casual bullying of his employees and tips into calculated sadism. He is a compellingly horrible character, delighting in precision tooling the perfect retort or act that will inflict the maximum pain or humiliation. He dismisses Petra’s work as solipsistic scribbles (in fairness, it is), savagely undermines his son and inflicts a particularly cruel wound on his maid.

Chapters two and three play out before we get to see first chapter, chronologically the beginning of the story, in which Petra’s dying mother refuses to reveal the identity of her father.

By this point, the drifting camera technique has rather outstayed its welcome and you start to wish it would stay in one place, if only to absorb more of the high quality performances. Likewise the score, composed of wafty choral music, begins to grate. Most problematic is an ending which fizzles out, taking with it the early promise of the film.